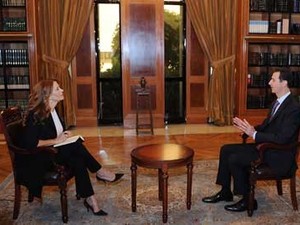 "Of course we will comply with it, and history proves that we have always honored all treaties we have signed," Assad said during an interview with Italian broadcaster Rai News 24, whose content was published by SANA.

The remarks were Assad's first since the U.N. Security Council passed a resolution Friday ordering the destruction of Syria's chemical weapons and condemning a devastating attack near Damascus.

Resolution 2118, the result of bruising negotiations between the United States and Russia, gives binding force to a plan drawn up to eliminate Assad's chemical arms.

Assad said his regime would "quite obviously" provide protection and assistance to the team of some 20 chemical arms inspectors who will arrive in Damascus on Tuesday.

In the wide-ranging interview, Assad said that "so long as the United States is honest," a U.S.-Iranian rapprochement would have a "positive" impact on Syria and the Middle East.

On Friday, U.S. President Barack Obama and his Iranian counterpart Hassan Rouhani spoke on the phone for 15 minutes, in the first contact between leaders of the two countries in over three decades.

Iran is Assad's main regional ally, while the United States backs the revolt that broke out in March 2011.

Asked whether he thought Europe could contribute to a proposed peace process for Syria, Assad said most European countries "are unable" to play a role.

"Frankly, most European countries are unable to play a role in Geneva 2, because they do not have all the necessary factors to succeed in such a role," he said.

"They have adopted the United States' policy in their relations with the countries (of the Middle East) ever since George Bush was president. How can they play a role if they lack credibility?" he asked.

Assad also lashed out at Europe for "imposing the worst embargo Syria has known since its independence" in 1946.

Though it has been postponed several times, a proposed peace conference for war-torn Syria dubbed Geneva 2 is now being planned for November.

The process, which was first proposed by the United States and Russia, envisages bringing regime and rebel representatives to the negotiating table.

But on Sunday Assad again insisted that the rebels battling his forces were "terrorists" who could not be party to the negotiations.

"All political parties can go to the Geneva conference, but we cannot talk... with organizations linked to al-Qaida or with terrorists," he said.

"We cannot negotiate with people calling for a military intervention in Syria," he added, in reference to the main opposition National Coalition.

More than 110,000 people have been killed since the uprising began in March 2011 and millions of Syrians have fled their homes.

Of course he will comply-- he has already farmed them out to his cronies in Lebanon and his Iranian Mullahs.-- and that naive John Kerry believed all of these charades about disarming them.

this is the most sissi dictator of the middle east! he barks but when israel or US warn him he complies and becomes the lord of democracy..
fag assad is only strong against syrians and lebanese!
U see why he is still in place? the west love him and see in him peace on israeli border..

sure hezbis straight away accepted truce... when they were boasting to hit haifa wa ba3ad haifa! still waiting for the rockets! LOL !!!!!!!!!!!!!