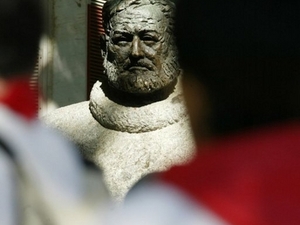 There are a few alterations the American writer might have abhorred -- a plasma television, air conditioning, and a price of up to 1,800 euros ($2,500) a night during the San Fermin festival, which runs to July 14.

Besides the modern light switches, though, the furnishings are as he left them in the 1950s, right down to the iron radiators.

Guests still peer from the two balconies over Estafeta street at six half-tonne fighting bulls and six steers charging through the town daily in the festival popularized by his 1926 novel "The Sun Also Rises".

Fifty years after his death, Pamplona has not forgotten the 1954 Nobel literature laureate.

"Hemingway gives us universal projection thanks to his stays in our city during the San Fermin festival and in this hotel where he had his own room," said Fernando Hualde, La Perla receptionist and Hemingway specialist.

On his first visit in 1923, Hemingway covered the nine-day San Fermin festival for Canada's Toronto Star.

The young journalist fell in love with the celebrations, bull fights, and dangerous morning bull-runs through Pamplona's winding cobbled streets.

The hotel then was favored by bullfighters. The oldest bullfighter by tradition took room 217, Huade said.

Hemingway befriended some bullfighters, who trusted him enough to let him into their room to witness the ritual of dressing in the matador's "traje de luces" (suit of lights).

"In the 50s when he was already an important writer, he allowed himself the luxury of staying in that room, which for him was mythical," Huade said.

Despite what may have been written since, however, Huade said, "Hemingway never did the bull-run because he was very scared of the bulls."

There are homages to Hemingway throughout Pamplona.

A bust of the writer crowns the entrance to the bullring and to the Iruna cafe where his regular spot is "Hemingway's corner".

His words still draw generations of young Americans, Britons, Australians, New Zealanders and Canadians to this capital of Navarre.

American Jim Rhodin, 71, is on his 21st visit. "He put Pamplona on the map with his books. I have read all his books," said the Atlanta-born tourist who has a passing likeness to Hemingway.

"Most of us, especially the English speakers, are here because of Hemingway. San Fermin would not be that big if it was not for Hemingway," said 58-year-old fellow American Robert Mykle, who organizes a mini San Fermin festival in Florida every year with his association, "Los amigos de Pamplona" (Friends of Pamplona).

Larry Mazlack, a Canadian sitting an outside table near the Perla, wearing a cap and a white beard, has come every year since 1976.

He has ready every Hemingway book, too.

But it was not Hemingway who convinced him to come.

Hemingway committed suicide July 2, 1961. A few days beforehand, he cancelled his reservation for room 217 at the Perla.