Real-Barca 'Clasico' Moved due to Elections 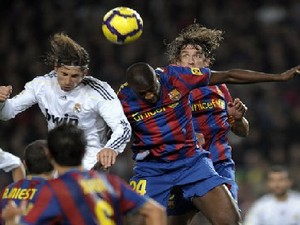 The first 'clasico' match of the season between Real Madrid and Barcelona has been postponed by one day to avoid clashing with regional elections in Catalonia, the Spanish football league said Thursday.

"The Professional Football League (LFP) has set the Barcelona-Real Madrid match for Monday 29 November at 9pm due to the ... parliamentary elections in Catalonia and the security problems that the concurrence of both events on the same weekend could have in Barcelona," it said.

The match at Barcelona's Nou Camp stadium between Spain's two top teams had been scheduled for the previous day, the date of the Catalan elections.

Barcelona, the reigning champions, are currently second in the league, one point behind arch-rivals Real.

The return 'clasico' of the season is scheduled for April 17.(AFP)