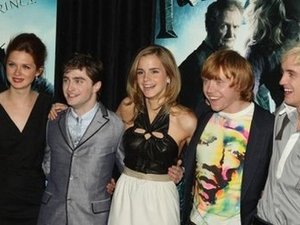 The first of two films that bring an end to the Harry Potter adventures has its world premiere in London Thursday, leaving its wealthy young stars contemplating their future after a decade in the spotlight.

Worldwide fans of the boy wizard have been eagerly awaiting the release of "Harry Potter and the Deathly Hallows: Part One", the first of two movies based on the seventh and final book by J.K. Rowling.

Daniel Radcliffe, 21, Emma Watson, 20, and Rupert Grint, 22, who have played Harry and his best friends Hermione and Ron in all eight films, will attend the red carpet premiere in London's Leicester Square on Thursday evening.

It is likely to be an emotional event for the young stars, who must now face the world without their on-screen characters who dominated their childhoods and turned them into multi-millionaires.

"It's the end of an era," Radcliffe -- Harry -- said ahead of the premiere, adding that when filming wrapped up this year on both parts of "Deathly Hallows", "everyone was sad -- we all cried. It was the end of something amazing."

The first six Harry Potter films earned 5.4 billion dollars (3.9 billion euros) at the box office, making it the most successful movie franchise of all time.

Since 2001, fans have followed Harry and his friends through Hogwarts School of Witchcraft and Wizardry and in their battles against the rising forces of the evil Lord Voldemort, who killed Harry's parents and wants to kill him too.

In "Harry Potter and the Deathly Hallows: Part One", Voldemort and his evil henchmen control huge swathes of the wizarding world, creating a dark and forbidding environment where Harry and his friends are constantly in danger.

They leave behind the safety of school and their families and set out alone to seek out horcruxes, items in which Voldemort has hidden pieces of his soul, so they can destroy them and ultimately bring him down.

Much of the film involves a road trip, as the trio travel around Britain to try to stay safe, and focuses on the close friendship between the main characters, in particular the budding romance between Hermione and Ron.

It ends on a cliffhanger, however, as the final resolution will not be known until Part Two, which is due out in July. That will cover a huge battle between Potter and his allies and Voldemort's dark forces.

The two films retain the all-star cast of the previous movies, including Oscar-nominated British actor Ralph Fiennes, who plays Voldemort, who will also attend Thursday's premiere.

Part One is released in most parts on the world on November 19.

The Harry Potter books have sold more than 400 million copies and have been translated into 69 different languages.(AFP)