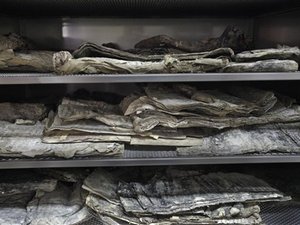 A trove of Jewish books and other materials, rescued from a sewage-filled Baghdad basement during the 2003 invasion, is now caught up in a tug-of-war between the United States and Iraq.

Ranging from a medieval religious book to children's Hebrew primers, from photos to Torah cases, the collection is testimony to a once vibrant Jewish community in Baghdad. Their present-day context is the relationship, fraught with distrust, between postwar Iraq and its Jewish diaspora.

Discovered in a basement used by Saddam Hussein's secret police, the collection was sent to the U.S. for safekeeping and restoration, and sat at NARA, the National Archives and Records Administration in Maryland, just outside Washington, until last year, when Iraqi officials started a campaign to get it back.

Initially contacts went well, but now the deputy culture minister, Taher Naser al-Hmood, says "The Americans are not serious" about setting a deadline for getting back the archive.

U.S. officials deny that they are delaying its return. They say they only recently got the roughly $3 million needed to clean up the materials, the reason they were carried to the U.S., and they question the rush to return the collection now, when the goal is so close.

"It is not U.S. government material, and we have every intention of returning it," said Phil Frayne, a spokesman for the State Department's Bureau of Near Eastern Affairs.

"We understand the frustration over the delay, but we're happy that this is going to finally move forward," he said.

Al-Hmood was skeptical, saying he had not been told about the money. "Let the American side prove its good will," he said. "We cannot trust the Americans. They have not fulfilled their previous promises."

The case is complicated by the knee-jerk suspicions that cloud everything related to Jewish history among the Arabs, Iraq's attempts to assert its sovereignty after years of U.S. domination and a diaspora trying to recover its history.

There are claims of Jewish pressure to prevent the return of the collection and questions about why the U.S. did not prevent the looting of Arab and Islamic treasures during the invasion but was able to bring the Jewish collection to safety in America. Among those voicing indignation about the transfer of the archive to America is Liwa Smaysim, the minister of archaeology, who belongs to a fiercely anti-American party in the government coalition.

On the other hand, once returned to Baghdad, the archive probably would be beyond the reach of Jewish scholars, especially Israeli ones, given the absence of diplomatic ties with Israel, and the anti-Semitism that exists here. Iraqi officials have vowed to restore the materials and digitize them so they would be available outside of Iraq as well.

Besides parchments and photos accumulated over the years, the collection includes books printed in Baghdad, Warsaw and Venice, one of them a Jewish religious book published in 1568, and 50 copies of a children's primer in Hebrew and Arabic.

They are the lost heritage of what was once one of the largest Jewish communities in the Middle East, which dated to the 6th century B.C. and ended with an exodus after the creation of Israel in 1948. Today fewer than 10 Jews are believed to be left here.

After the collection was found by a U.S. military team searching for weapons of mass destruction, the U.S.-headed agency temporarily governing Iraq signed an agreement with the U.S. Archives in Maryland to take its contents to the United States.

It stipulated that the U.S. would restore and display the materials before returning them to Iraq, but the Iraqi government could have them back any time it asked, regardless whether the work had been completed.

Iraqi Culture Ministry officials say they appreciate the U.S. efforts to save the materials but are frustrated about getting them back.

They say that in meetings and conversations last year with the State Department and NARA, a decision was reached to return half the materials by the end of 2010, and the rest to be restored and displayed before also coming back to Iraq.

A NARA report, obtained through the Freedom of Information Act by The Associated Press, says Saad Eskander, the head of the Iraqi National Library and Archives, met with U.S. representatives on June 23, 2010, and they decided upon a plan, including the immediate return of half the archive. For reasons no one can entirely agree upon, however, things began to fall apart.

Al-Hmood said that when the December deadline passed, the Iraqis decided to officially ask for the archive back, and repeated the request six months later. In response, he said, the U.S. sent messages discussing what he says are "technical issues" and which he considers procrastination.

However, the Iraqi government seems in two minds about the matter. Deputy Foreign Minister Labid Abawi, whose ministry is Kurdish-run and has close ties to the U.S. government, said it prefers the U.S. do the restoration, on the ground that Iraq lacks the capability.

Eskander and al-Hmood say the Iraqi Cabinet tasked their offices, not the Foreign Ministry, with recovering missing documents, and they are trying to do their job. A letter from the Coalition Provisional Authority, the U.S. agency that ran Iraq after the invasion, and obtained through the Freedom of Information Act, confirms the Ministry of Culture is charged with making decisions about the Jewish archive.

Eskander shepherded his library through the violence that followed the invasion and is getting a new five-story expansion project now being built. The rattle of gunfire has been replaced by the boom of construction, while staff repair other, similarly mold-infested documents. Eskander says that is proof that Iraq can and will do the needed restoration on the Jewish materials.

He himself is a Faihly, a member of a small Shiite-Kurdish minority persecuted under Saddam. He says it is vital that Iraqis know their history and that they be made aware that Jews were once part of this country.

He and al-Hmood also are pushing for the return of millions of sensitive security-related documents believed to be in CIA and Pentagon hands. These would be much more significant for the Iraqi people, but for now the Jewish archive has been the focus of activity.

Al-Hmood said, "There are Jewish organizations that exert great pressure to prevent the return of the archive, claiming that there are no Jewish people in Iraq any longer."

The State Department says it has not succumbed to any pressure and is simply fulfilling its part of the agreement to restore the materials before returning them to Iraq.

Frayne said he understands the frustration over the delay but adds that with nearly $3 million in U.S. taxpayer money allocated, restoration can move ahead.

NARA will hire about 10 people to do the work, and part of the money will go toward bringing Iraqi archivists to the U.S. and training them in restoration, said Doris Hamburg, NARA's director of preservation programs.

Frayne said the U.S. has requested repeatedly that the Iraqi side appoint an archival team to help draft an addendum to the 2003 agreement but has received no response.

Although Al-Hmood and Eskander said they had not been told about the $3 million, Al-Hmood said talks could resume if a firm time line were set for the archive's return.

The role, if any, of outside Jewish groups in the dispute is unknown, but Andrew Baker of the American Jewish Committee questioned why Iraqi officials were in such a rush and wondered who in the Jewish community would be able to make use of the collection once it is taken to Iraq.

A member of the Iraqi Jewish diaspora who follows the talks closely said it initially was hoped the archive would serve as a line of communication with the Iraqi government on other issues such as protecting Jewish cemeteries and shrines in Iraq.

The perceived involvement of American Jewish organizations, however, has led to suspicions they were trying to block the archive's return, and the archive became an impediment to further talks, he said. He requested anonymity, citing the sensitivity of the archive issue.

Sounds similar to British crimes in the past, get permission from illegal occupying 'government' to steal valuble pieces of history.

Most are still in the British Museaum, despite Greece and other countries wanting what is theirs back.