Abboud Says GPI will Return Stronger than Ever 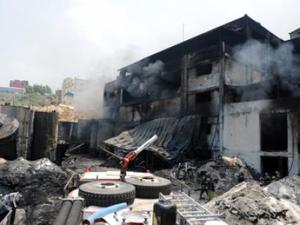 Tourism Minister Fadi Abboud promised his costumers that GPI will return stronger than before, apologizing for the fire that gutted his plastic factory in Mazraat Yashouh.

Abboud told As Safir newspaper on Tuesday that the machines at the factory cost approximately $12 million. “So far, there is no complete estimate for the losses,” he said.

The minister thanked the civil defense members who endangered their lives bravely for extinguishing the fire that erupted on Sunday night and lasted till noon Monday.

The newspaper quoted him as saying: “Unfortunately they (Civil Defense Team) are suffering from the lack of modern equipment, training and organization.”

The minister attributed the huge fire at the plastic factory to blazes that broke out in the UPS room.

He noted that there are 160 workers in the factory. However, no lives were lost in the incident.

Out of Curiosity, how many "Chemical Grade" fire extinguishers had Minister Aboud installed in his factory?
Was there an emergency procedure in place?
Was a fire safety plan ever prepared?

Given no one was killed I suppose procedures were ok.

Given the fire brigade fought this for many hours, would it have a made a difference?

Can he show us the annual Maintenance agreement of the UPS of his factory.