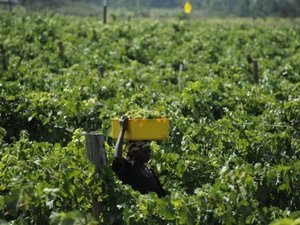 The mist lifts from the mountains of Kenya's fabled Rift Valley, better known for its flamingoes and zebras than its wine, as women weave in and out with baskets of grapes on their heads.

It is grape picking time at Kenya's only commercial vineyard.

Dressed in cowboy boots and jeans with three days' stubble and greying hair, manager James Farquharson supervises the harvest and pretty much all else going on at the vineyard.

He dips his hand into one of the baskets and looks at a bunch of grapes with satisfaction.

"We're practically on the Equator and at very high altitude. That makes management of the vines here very different from the way it would be in France or even in South Africa," he explained.

The goal on this more-than-mile-high farm is ambitious -- to produce a quality wine in Kenya.

The brand is called Leleshwa -- the name of a small olive-like local tree. It is produced at the Rift Valley Winery which is owned by Kenya Nut, whose core business, as its name suggests, is cashew and macadamia nuts.

Farquharson spent his childhood between Kenya, Scotland and South Africa, where he studied wine making. Then came a managerial position with a large privately-owned South African wine producer. Though he found the job stimulating it was "too office-based" for his liking.

Out of the blue, Farquharson received an email saying a rich Kenyan businessman was looking for a specialist to develop his vineyard -- and it is now more than three years since he decided to take up to the challenge.

"I said to myself that this was a chance for a wonderful adventure, to try something different," he recalled.

Pius Ngugi, the businessman who owns Kenya Nut as well as Thika Coffee Mills, had tried making wine from vines at his farm north of Lake Naivasha in the Rift Valley in the 1990s.

After deciding he was never going to achieve a wine of constant quality, he put the project on the backburner. His son Mbugua Ngugi, knowing how close the project had been to his father's heart, revived it -- but this time seeking out a professional viticulturist and winemaker who knew Africa.

The vineyard's geographical situation -- at 2,000 meters (6,500 feet) right near the Equator, 90 kilometers (55 miles) northwest of Nairobi -- as well as Kenya's climate provide Farquharson with several challenges.

But he knew extreme winemaking was working elsewhere, including in Argentina which has some of the world's highest vineyards at more than 3,000 meters along the Andean mountain range.

"We'll never produce the sort of 'great wines' that the French do," said Farquharson, but "we try to keep it simple and respect the fundamental principles of wine production."

Feedback so far is encouraging.

"From the wine-making point of view everything seems to have been done properly," said Marcus Mitchell, the chef and manager at the Talsiman, a restaurant set in the leafy upmarket Nairobi suburb of Karen.

"It's light, it's summery and it's Kenyan," he said of the Leleshwa wine.

Cost is also on its side, since Leleshwa is exempt from heavy import duties that push up the price of French or the popular South African and Chilean wines.

A Leleshwa Sauvignon blanc retails in local supermarkets for KES 540 (about six dollars/4.2 Euros) and the brand's red for KES 645, which is about 10 to 15 percent less than a comparable Chilean wine here.

For Mitchell, Leleshwa can hold its own against the South African and Chilean wines.

"Reactions so far have been very good. The challenge is getting people to opt to taste it," he said.

The wine from Naivasha, however, is gaining a following among Kenya's fast-growing middle class that is more and more "open to the idea of paying for quality products," Mitchell said.

Over the next 10 years the vineyard hopes to boost annual production to three million bottles from just 80,000 currently.