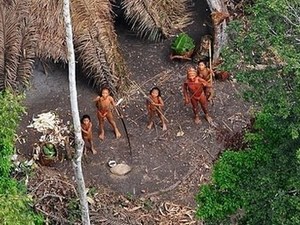 Forest groups on Wednesday welcomed an Indonesian commitment to protect the rights of indigenous people who have long complained that their land is being stolen in the name of conservation schemes.

With billions of dollars in foreign aid and carbon offsets potentially on the table, tribal groups have accused internationally backed efforts to tackle deforestation of pushing them off their ancestral land.

Presidential adviser Kuntoro Mangkusubroto told a forestry conference on Lombok Island this week that Indonesia would address the issue by implementing a decade-old land law recognizing the rights of forest communities.

It will also develop a land tenure map identifying the location and size of forests and how they are used, as well as defining the legal status of the country's vast forested areas.

"Indonesia is committed to longer-term forest and land tenure reform," he said.

"All should be implemented based on the principle to recognize, to respect and to protect customary rights," he added.

Forest groups hope the government will fulfill its obligations to inform and consult with indigenous groups whose lives could be dramatically altered by U.N.-backed measures to prevent deforestation.

"We are very pleased with Indonesia's commitment," said Victoria Tauli-Corpuz, a board member of Rights and Resources Initiative, a global coalition of forest research groups.

"It's not a matter of recognizing who the indigenous people are and their rights, but developing a legal framework to recognize their ownership over forests. We are very hopeful that changes will come about."

Indigenous Peoples Alliance Secretary-General Abdon Nababan said forest people were in danger of being forced off their land and denied their customary livelihoods in the name of conservation.

The alliance last month demanded a halt to conservation schemes worth billions of dollars on Borneo island, saying they could be a form of "cultural genocide" if not handled properly.

Indonesia is often cited as the world's third biggest emitter of greenhouse gases, due mainly to rampant deforestation by the palm oil, mining and paper industries.

Deforestation is estimated to account for almost 20 percent of global greenhouse gas emissions.