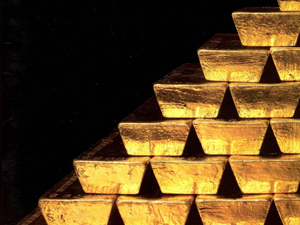 The price of gold surged to a record close to $1,580 an ounce here on Wednesday, as investors switched into the metal for safety from the eurozone debt crisis, traders said.

"Gold hit a new all-time high today as investors continue to fret over the European sovereign debt situation," said analyst Ian O'Sullivan at trading firm Spread Co, noting that the metal has risen for eight days in a row..

"With Italy, Spain, Ireland and Portugal worries intensifying and now the Fed minutes suggesting some members were thinking about the need for additional easing, investors have just hit the panic buy buttons this week.

EU governments are scrambling to fight debt contagion choking Italy and Spain, amid mounting sentiment that Greece could default on its debt despite a massive EU-IMF rescue.

"The heightening of sovereign debt uncertainty in Europe has provided a boost to gold prices despite the seasonal weakness in demand," said Barclays Capital anlayst Suki Cooper.

Added to the mix, Moody's rating agency unexpectedly slashed Irish government bonds to junk status on Tuesday, which sent borrowing costs to the highest levels since Ireland joined the eurozone.

The International Monetary Fund and European Union rescued Ireland last year with an enormous emergency loan. Since then, fellow debt-laden eurozone nation Portugal has also been forced to seek an EU-IMF bailout, while Greece's rescue has been deemed insufficient.

"After Greece and Portugal, Ireland is now the third eurozone country whose government bonds have been assigned a "junk" rating by at least one rating agency," Commerzbank analysts said in a note to clients.

Gold won further support from better-than-expected second-quarter economic growth for Asian powerhouse China, which is a major consumer of commodities.

China said on Wednesday that its economy expanded at a slower but still robust pace in the second quarter as Beijing battles to bring politically sensitive inflation under control.

Gross domestic product in the world's number two economy grew 9.5 percent year-on-year in the April-June period, the National Bureau of Statistics said, as policymakers clamped down on bank lending to tame soaring prices.

The figure was higher than the 9.4 percent growth forecast in a poll of analysts by Dow Jones Newswires, but slower than the 9.7 percent posted in the first three months of the year and 9.8 percent in the fourth quarter of 2010.