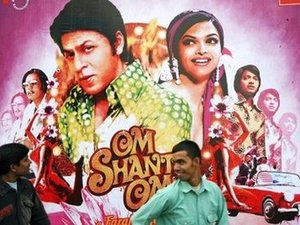 Hollywood and Bollywood, the world's largest movie industries, have signed a pact that will boost cooperation for producing and distributing their films.

The "historic declaration" signed Wednesday between the city of Los Angeles and the Indian film industry strengthens commercial ties and will move to increase the number of Indian productions that are filmed here, the Motion Picture Association of America (MPAA) said in a statement.

The two industries account for the majority of the world's cinema, and cooperation between them has already grown strongly in recent years.

Representing the Indian delegation, producer Bobby Bedi praised the pact's potential, noting how Hollywood and Bollywood "are economically robust and represent significant economic and cultural interests of their respective countries."

India has "always held a fascination for Hollywood, and this agreement pulls us closer together with the aim of sharing ideas and best practices on domestic and international film production," he added.

India's film and television industry generated revenue of 7.7 billion dollars in 2008 and the figure is expected to top 13 billion dollars by 2015, according to the study conducted by consultancy PricewaterhouseCoopers.

The figures are dwarfed by the major Hollwood studio's total annual revenue of around 40 billion dollars, but the film audience on the subcontinent dwarfs its western counterpart.

Last year, some three billion cinema tickets were sold in India, compared with 1.5 billion in the United States, according to a Crisil media and entertainment report last September.

Bollywood also has a history of remaking Hollywood films, often with virtually identical plots, characters and even musical scores.

But with films now being released overseas and Hollywood studios signing tie-ups with their Indian counterparts, there has been a spate of warnings and court cases about plagiarism, and Wednesday's declaration, the MPAA pointed out, also agreed to strength "content protection."

"Our vibrant film communities share many of the same goals and concerns," said MPAA president Bob Pisano in a statement.

"The numerous co-productions with Indian studios over the past several years are evidence of a growing bond between our two industries. Today's action is an important step toward furthering that growth."(AFP)