Jumblat on Letter to Assad Report: I haven't Reached This Level of Political Stupidity 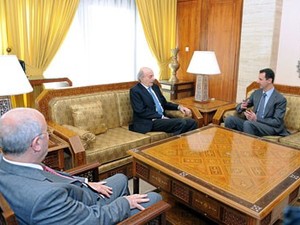 Progressive Socialist Party leader MP Walid Jumblat denied on Monday reports saying that he sent a letter to Syrian President Bashar Assad, in an attempt to reconsider his current relation with the Damascus regime.

"I haven't reached this level of political dotage and stupidity,” Jumblat told the PSP-affiliated al-Anbaa website.

The Daily Star newspaper reported on Monday that Lebanese Democratic Party leader MP Talal Arslan has conveyed a letter form Jumblat to Assad, in which the PSP leader asked for a reconsideration of the relations between his party and the Syrian regime.

The report also said the letter included asking Assad to allow two Druze soldiers to rejoin the Syrian army after they had announced their defection.

"Assad sent a partial reply to Jumblat,” The Daily Star quoted sources close to the March 8 alliance as saying.

However, Arslan on Monday denied these reports.

Jumblat refused to explain The Daily Star's report in political terms, "because the newspaper is owned by the Hariri family," according to Al-Akhbar.

is this how you talk about your March 8th partners?

This paltry evil Jumb has no loyalty for his country. He can only spread hatred and sedition with no regard to the national security of Lebanon. He must be mentally sick and should be hence sectioned to a psychiatric asylum at no dely.

As if history is not a witness on how low the low has gone and shall once again go, go and go.