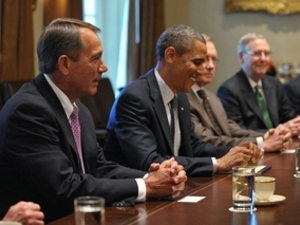 Cries of alarm over the stalemate's potential impact on the world economy grew louder as Obama and congressional leaders opened their fifth straight day of talks at the White House with long odds of a breakthrough.

"I do not expect, today, a hallelujah moment," cautioned presidential press secretary Jay Carney, who told reporters the U.S. Treasury had begun making contingency plans because "it would be irresponsible not to."

Economists and finance and business leaders have warned that failure to raise the U.S. debt ceiling above the current $14.3 trillion by August 2 could send shockwaves through a world economy still reeling from the 2008 collapse.

U.S. Treasury Secretary Timothy Geithner, emerging from a midday meeting with Senate Democrats, announced: "We looked at all available options and we have no way to give Congress more time to solve this problem."

"The eyes of the country are on us, and the eyes of the world are on us," said Geithner, a vocal proponent of a deal to narrow the yawning U.S. budget deficit while allowing cash-strapped Washington to borrow more.

McConnell's proposal would effectively let Obama raise the debt ceiling with support just from Democrats, who would shoulder the political responsibility but get to protect cherished social safety net programs.

Republicans would be able to vote against raising the debt ceiling, as many "Tea Party" conservatives have vowed to do no matter what, and would be in a strong position to enforce their fierce opposition to tax hikes on the rich.

"I have no idea," if it can pass the House, but it "might look pretty good a couple of weeks from now, "Republican House Speaker John Boehner told reporters.

JPMorgan Chase chief Jamie Dimon warned an "irresponsible" failure to avert a default could be a "catastrophe" with grim consequences "not just for the health of the United States, but the financial health of the world."

And Bernanke warned key lawmakers in a hearing that a default "would be a self-inflicted wound" that would provoke a major economic crisis and risk a second recession.

Republicans, meanwhile, redoubled their calls for a balanced budget amendment to the US Constitution that would force deep cuts in spending while tightening restrictions on Washington's ability to raise taxes.

McConnell complained that Democrats "want to simply borrow and spend our nation into oblivion" and declared "if the president and Democrats in Congress won't agree to cut back, let's force them."

Republicans embraced calls for fiscal discipline when Obama took office in January 2009, after years of playing down swelling U.S. deficits, approving massive tax cuts, and rejecting calls to pay for the Iraq and Afghanistan wars.

But a new opinion poll by Quinnipiac University found the US public more ready to blame Republicans than Obama by a 48 percent to 34 percent in the event the talks collapse.

Obama, who is seeking a second term in the November 2012 elections, garnered a 47 percent overall job approval rating -- putting him below the 50-percent mark deemed crucial for incumbents.

The U.S. hit its debt ceiling on May 16 and has used spending and accounting adjustments, as well as higher-than-expected tax receipts, to continue operating without impact on government obligations, but can only do so to August 2.