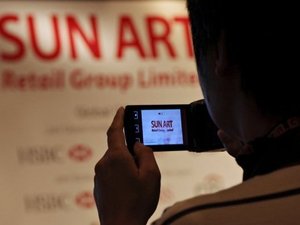 China's top hypermarket operator Sun Art Retail Group has delayed its Hong Kong trading debut scheduled for Friday over an error in its prospectus, after raising $1.06 billion from the share sale.

The retail giant, backed by France's Groupe Auchan SA, has sold 1.14 billion shares at HK$7.20 (93 US cents) each, at the top end of its price range, bucking a recent downturn in the Hong Kong IPO market, the world's biggest.

The firm said in a statement Friday that it postponed the listing on the Hong Kong stock exchange after it had overstated its earnings per share in the IPO prospectus. It will issue a supplementary prospectus on Monday.

"Trading of shares is currently expected to commence on Wednesday, 27 July, 2011," Sun Art said in the statement.

The retailer has said its initial public offering was 41.1 times oversubscribed, defying a batch of weak new listings in Hong Kong, where some firms have also decided to delay or cancel their listings citing turmoil global markets.

Italian luxury goods maker Prada made a lackluster debut in the financial hub in June after raising a lower-than-expected $2.14 billion in its share sale.

The firm has said it planned to use half of the proceeds to open 51 stores in mainland China by the end of next year. Sun Art currently has 197 hypermarkets in China.