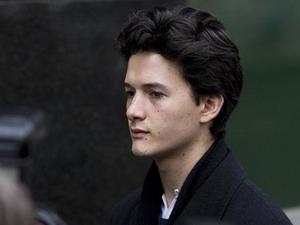 The son of Pink Floyd guitarist David Gilmour was jailed for sixteen months on Friday for an alcohol and drugs-fuelled attack on Prince Charles' convoy during a student riot in London last year.

Charlie Gilmour, 21, had pleaded guilty to violent disorder in May but was granted bail until Friday's hearing at Kingston Crown Court in southwest London in order to complete his exams at Cambridge University.

The former model was found to have hurled a bin at Charles' car and was also accused of smashing a window at a high street store, and was photographed hanging from the Cenotaph war memorial in London during the riot on December 9.

The court heard Gilmour had turned to drink and drugs after being rejected by his biological father, the writer Heathcote Williams, and had taken LSD and valium in the hours leading up to the violence.