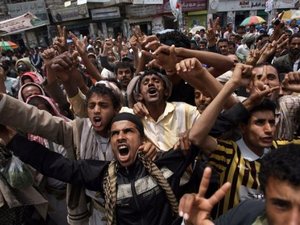 Ten Yemenis were killed and at least 37 others wounded in the city of Taez, south of Sanaa, security and tribal sources and witnesses said on Friday.

Security official Colonel Ahmed Rezaz and two companions were killed in an ambush by armed opposition tribesmen, a security source in Taez said.

Witnesses said four tribesmen and three civilians were also wounded in the attack in the Sharab al-Rona area of the city.

The security source said that seven civilians were also killed and 30 wounded by shelling in northern Taez by Yemen's Republican Guards, which began during clashes with opposition tribesmen.

Tribal sources and witnesses had earlier put the toll from the shelling at two dead and 22 wounded.

The fighting broke out on Thursday night between the Guards, loyal to President Ali Abdullah Saleh, and tribesmen, allied with demonstrators who have been calling for him to quit since January, the tribal sources said.

The shelling was especially focused on al-Rawda and Osaifra neighborhoods.

Witnesses said there was widespread panic in the city.

Anti-regime activists had meanwhile appealed for protests under the slogan "Friday of a Civil State," after a call from influential cleric Sheikh Abdul Majid al-Zindani for the establishment of an Islamic state.

Tens of thousands of anti-regime protesters prayed at Sanaa's University Square, the epicenter of protests against Saleh, but did not linger long afterwards, an Agence France Presse correspondent reported.

Saleh supporters had called for demonstrations of "Thanks and gratitude to the Custodian of the Two Holy Mosques," in reference to King Abdullah of Saudi Arabia, where Saleh has been hospitalized for more than a month after being wounded in a bomb attack on his palace.

Tens of thousands of regime supporters also turned out on Friday in the capital, the Agence France Presse correspondent said.