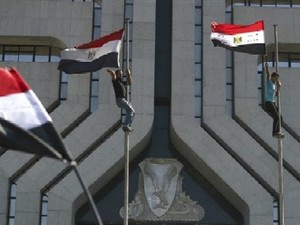 Thousands of protesters rallied across Egypt on Friday, capping a week of nationwide sit-ins to demand political change as anger grows with the military rulers over the slow pace of reform.

More than 28 movements had called for the rallies to pressure the Supreme Council of the Armed Forces (SCAF) -- which took power when president Hosni Mubarak was toppled -- to respond to their demands.

In Cairo, thousands of demonstrators crowded into Tahrir Square, the epicenter of the protest movement that overthrew Mubarak in February and where hundreds have been staging a sit-in for a week.

A preacher who gave the sermon at the Friday noon prayer in the square called for speedy trials of policemen responsible for the deaths of protesters during the 18-day revolt and led a funeral prayer for them, the official MENA news agency reported.

In the Mediterranean city of Alexandria, around 5,000 people broke off from the main rally at Qaed Ibrahim Square to protest outside the police headquarters where they called for the resignation of Interior Minister Mansour Essawy.

In Suez, several hundred people protested in Al-Arbaeen Square, as troops continued to protect the entrance to the strategic Suez Canal.

The turnout was significantly smaller than last week, when tens of thousands of people took to the streets.

Some such as the powerful Muslim Brotherhood movement have stayed away from protests after concessions offered by the army and government earlier this week.

"The cabinet has the right to be given a chance for two weeks," senior Brotherhood leader Essam al-Erian told Agence France Presse.

But he said that after two weeks, the results will "either merit gratitude or protest."

The protesters, who have dubbed the rallies the "Friday of the Final Warning," are calling for a defined and transparent plan for the transition, criticizing the military junta for their absolute grip on power.

The cabinet said it had sent ambulances and medics to the square to tend to protesters on hunger strike.

Hisham Hammouda, a financial planner who quit his job 11 days ago to join the protests, has not eaten for six days. He insists that the revolution should remain peaceful.

"We will try to use all harmless ways to express ourselves," Hammouda said from Tahrir Square.

Among the key demands are an end to military trials of civilians, the redistribution of wealth and the open and speedy trials of former regime officials.

Protesters also want police accused of torturing and killing protesters -- whether before or during the January 25 uprising -- to be brought to justice.

The mounting tension has prompted both the government and the military council to offer some concessions in a bid to placate protesters.

Prime Minister Essam Sharaf ordered the sacking of senior police officers accused of abuse and Essawy announced a complete restructuring of his department.

On Wednesday, after a lengthy silence, the military council insisted it supported the revolution and said it would continue to support the goals of the revolution.

But the concessions fell flat with protesters, who labeled them empty rhetoric.

"Our demands are the same but the conditions are different, since we reject the speeches of the prime minister and SCAF," said Bola Abdou, 23, one of those camping in Cairo's Tahrir Square.

"We want (our demands) taken into account, so we will stay in the square," said Ibrahim Abul Kheir, 25, a member of the April 6 protest movement.