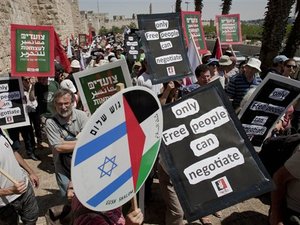 Some 1,000 Israelis and Palestinians gathered in east Jerusalem on Friday for a protest march to support the Palestinian bid for United Nations recognition.

The marchers waved Palestinian flags and carried signs reading "marching to independence" and "only free people can negotiate for peace," an Agence France Presse photographer said.

The Palestinians plan to ask the U.N. General Assembly to recognize a Palestinian state when the world body gathers in September, a move opposed by Israel, which says progress can only be made through negotiations.

"This march has been considered by many as carrying special significance, since it will serve as a litmus test for the extent of popular support among Israelis and Palestinians for the diplomatic efforts for a declaration of independence," organizers said in a statement.

Organizers said they planned to march from the Old City to the neighborhood of Sheikh Jarrah, the site of weekly protests against efforts by Jewish settlers to move into largely Arab neighborhoods in the city.

The route is the reverse of a march held last month by right-wing Israeli youth to commemorate Israel's capture of east Jerusalem in the 1967 Middle East war.

Israel later annexed east Jerusalem, claiming it as its "undivided and eternal capital," a move that has not been recognized by the international community.

The Palestinians claim east Jerusalem as the capital of their would-be state.

Organizers had said they feared right-wing Israeli groups would try to disrupt the march, but there were no immediate signs of disturbance amid a heavy police presence.