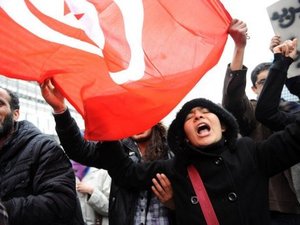 Tunisian police fired teargas Friday to break up an anti-government protest in the capital, witnesses said.

After Friday prayers, hundreds of protestors joined a sit-in near the seat of government in the Kasbah neighborhood to demand the resignation of the interior and justice ministers.

The demonstrators were clamoring for the judiciary's full independence and the prosecution of those responsible for the deadly repression of Tunisia's democratic uprising earlier this year.

"We came here to stage a peaceful demonstration, we have nothing against you," Ziad, a young teacher who traveled some 120 kilometers from Kelibia for the protest, shouted at police.

"Our demands are simple: the sacking of the interior and justice ministers, sanctions against the masterminds of killings and redress for the victims," he said.

An unprecedented popular uprising led to the January ouster of Zine El Abidine Ben Ali, one of the world's most entrenched dictators, but youth groups have been critical of the new administration's performance since.

Armored vehicles formed a tight cordon around the ministries, locked in a tense standoff with swarms of young protestors wearing bandanas and t-shirts bearing pro-democracy slogans.

"We do not want the fall of the government but it has to stop bringing Ben Ali cronies back into the fold," Ziad shouted from an improvised stage.

"No-one can take the people's revolution away," a veiled young woman said.

The demonstrators claimed a "right to employment" and complained that the government has failed to deliver.