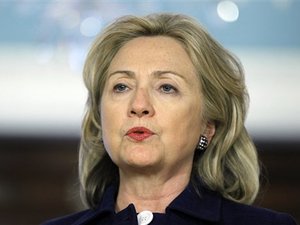 U.S. Secretary of State Hillary Clinton on Friday said Syria cannot return to the way it was before unprecedented anti-regime protests, but how the situation would evolve remained unclear.

"We have said that Syria can't go back to the way it was before," Clinton said on the sidelines of a meeting of the Libyan contact group in Istanbul.

Syrian President Bashar al-Assad "has lost his legitimacy in the eyes of his own people because of the brutality of their crackdown, including today," she added, referring to the killing of 27 protesters by Syrian security forces Friday as more than a million people took to the streets.

"We're also well aware that the ultimate destiny of the Syrian regime and the Syrian people lies with the people themselves and I think this is still an unfolding situation," Clinton added.

The top U.S. diplomat indicated it was still unclear what steps the Syrian opposition will take.

"I don't think we know how the opposition in Syria will be able to conduct itself, what kind of avenues for action are open to it," she said.

She added that it was clear that the Assad regime was making empty promises that were not moving the country forward.

"What we are seeing from the Assad’s regime, the barrage of words, false promises and accusations is not being translated into a path forward for the Syrian people, and it is ultimately the responsibility of the Syrian people to choose and chart their own course," she said.