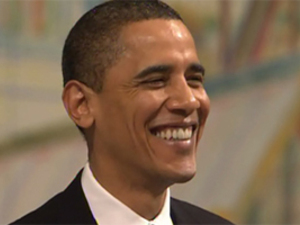 Astronauts aboard the International Space Station got a very long-distance call Friday from U.S. President Barack Obama, who joked that he thought he was dialing out for pizza.

Hot from giving a press conference at which he pushed Republicans to reach a deal on raising the U.S. debt ceiling, the American president took time out to chat with the 10 astronauts currently aboard the ISS.

"I was just dialing out for pizza, and I didn't expect to end up in space," Obama quipped, raising a laugh from the gathered crew.

But turning serious, he told the astronauts how proud he was of them and said their work "ushers in an exciting new era to push the frontiers of space exploration and human spaceflight."

"The space program has always embodied our sense of adventure and exploration and courage," the president said.

He said he wanted to thank all the men and women of NASA for the work that has been poured into the 30-year space shuttle program which will end when Atlantis and its crew of four return to Earth next week.

"You helped our country lead the space age, you continue to inspire us."

Atlantis shuttle commander Chris Ferguson replied that: "We're honored to represent everybody on the planet Earth."

"Godspeed as you guys return home next week," Obama wished them.

Earlier the four crew members from the Atlantis had repaired one of the space shuttle's four main computers after it crashed triggering an overnight alarm.

The glitch, which startled the astronauts out of bed, threatened to dampen the last-ever mission of the space shuttle program.

But the crew were able to recover use of the computer and NASA believes it will be configured normally for the shuttle's last return to Earth on July 21.

Ferguson later played down the incident in an interview on NASA TV, saying there had been some "minor glitches" with the computer. "We're very optimistic it's going to work for reentry," he added.

The four U.S. astronauts on Atlantis's STS-135 mission are working alongside the Expedition 28 crew of six already aboard the ISS to transfer equipment and supplies from the Raffaello multi-purpose module.

They are unpacking the logistics carrier, which arrived aboard the Atlantis with 9,403 pounds (4,300 kilograms) of supplies to restock the orbiting outpost for the coming year.

NASA allowed the astronauts to sleep in an extra 30 minutes Friday morning after the computer failure, and they were awakened by Paul McCartney and his performance of the Beatles' classic "Good Day Sunshine."

McCartney also had a special recorded message for the astronauts: "Good morning guys. Wake up! And good luck on this, your last mission. Well done."

Despite what the NASA official described as "little hiccups along the way," including an earlier problem with general purpose computer 3, the Atlantis mission is on track, with some 70 percent of equipment and supply transfer to the space station complete.

I do salute our brave astronauts too, just can't wait to see them when they come home. Anyway talking about astronauts here, I've read in an article a news related to this one which says that a quick trip to the ISS was the last flight of the Space Shuttle, and the Shuttle Atlantis has just come back. Until a brand new space automobile is ready to be used by National Aeronautics and Space Administration, it definitely won't be able to send up any astronauts on its own. Until an exclusive contractor comes up with a brand new one, or NASA does, astronauts have to hitch a ride with the Russian space organization. It costs large <a title="We’ll help you find any kind of payday loan you want" href="http://personalmoneynetwork.com/personal-loans/">personal loans</a> to go to space though.