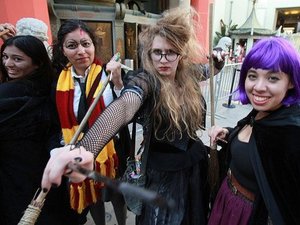 The final installment of the Harry Potter films cast a spell over North America Friday raking in an estimated record $43.5 million at its opening midnight showing, Variety magazine said.

"Harry Potter and the Deathly Hallows -- Part 2," the action-packed finale to one of the most successful movie franchises of all time, opened in North America cinemas Friday with a special midnight screening.

The film sees boy wizard Potter take on the evil Lord Voldemort in a climactic showdown, the second of two movies based on the seventh and final Potter book by British author J. K. Rowling.

It shot past "The Twilight Saga - Eclipse," the third in a successful series about teen vampires and werewolves which took in $30 million at its opening midnight screening.

Hollywood is now waiting to see whether Potter, and his wizarding friends, can set a new all-time opening weekend record, and beat current record holder superhero Batman into second place.

"The Dark Knight," the last of Batman's film adventures, hauled in $158 million on its opening weekend in 2008.