Greece in The Spotlight After Evoking Selective Default 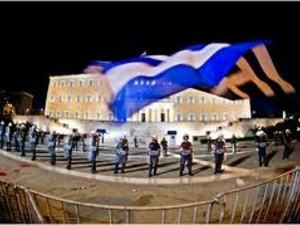 Greece heads to another EU summit next week on fresh aid for its debt-wracked economy after evoking -- before pulling back -- the thorny notion of a selective default that could unleash a Eurozone storm.

The term is understood to mean a pick-and-choose approach to a country's maturing debt, with a government arranging to delay repayment on certain obligations while continuing to fully honor others.

But to many investors, and more importantly to credit rating agencies that have already demoted Greece's bonds to junk status, these are just semantics.

A French plan for private banks to rollover Greek government bonds as they came due was effectively shot down this month when ratings agency Standard and Poor's said that such an arrangement would be tantamount to default.

Fellow evaluator Fitch this week also warned that "private sector involvement would likely be viewed as a sign of sovereign credit impairment and could trigger a rating default event."

European officials have sought to square the circle and lighten Greece's crushing repayments timetable on its 350-billion-euro debt without triggering a horror scenario that could have unforeseen consequences for the troubled Eurozone.

The Dutch finance minister broke the ice this week by revealing that the 17 Eurozone ministers "did not exclude" the notion during talks in Brussels.

He was swiftly overruled by colleagues but later statements by the Belgian finance minister showed that the EU is still trying to tiptoe around the issue.

"There needs to be an absolutely voluntary (private sector) participation so that it is not seen as a default," he told Agence France Presse on Saturday.

Greece itself seems torn on the issue, with its finance minister appearing to downplay the dangers before Prime Minister George Papandreou stepped in to condemn "wordplay" on the matter.

"It is not a real event, it is not default. It is an evaluation by the three familiar rating agencies," he said, meaning Fitch, Moody's and Standard and Poor's.

"It does not on its own create a reality, nor does it activate the notorious CDS mechanism," Venizelos said, referring to credit default swaps that have gained in value in expectation of Greek insolvency.

"If we are calm and wise, if we have a plan and apply it, we can manage anything to our benefit, because all this ultimately leads to a more viable debt...all this is done to provide a solution," the minister said.

"Just uttering the term could have disastrous results...and this is true for all its variants," Samaras said.

And Prime Minister Papandreou said "wordplay should not be allowed, in particular the deliberate confusion of terminology used by rating agencies in their reports with painful situations for the real economy."

Regardless of the outcome, Greece officially entered "uncharted territory" this week, a senior banker told AFP.

Greek officials this week held two days of talks with private creditors in Rome for a third time in less than a month.

Eurozone nations will hold an extraordinary summit on July 21 in Brussels on ways to tackle the debt crisis.

The problem, however, has spread: Ireland and Portugal have also had to be bailed out, while Italy and Spain are seen to be at risk given the strained state of their public finances.

The EU and International Monetary Fund bailed out Greece in May 2010 with a package worth 110 billion euros ($160 billion) in exchange for a series of drastic austerity measures to stabilize its public finances.

The package has had some success but Greece is still in serious difficulty and needs another bailout estimated to be around the same amount.