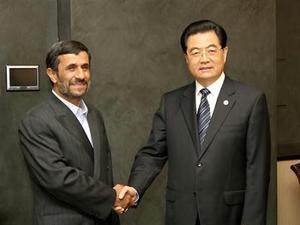 Iran and China on Saturday signed a series of agreements worth $4 billion (2.8 billion euros) for infrastructure projects as part of a broader bid to boost trade volume between the two nations, Iranian state media reported.

As part of a $500 million (354 million euros) deal, China agreed to provide Iran with 60 energy recovery incinerators, which are to be installed within a year in major cities and in Iran's northern tourism hub along the Caspian sea.

The agreements were signed during a visit by He Guoqiang, a senior executive of the Chinese Communist Party, who heads a delegation visiting Iran. He was received by Iranian President Mahmoud Ahmadinejad.

China and Iran have become major economic partners in recent years, partly thanks to the withdrawal of Western companies in line with sanctions against the Islamic republic over its contentious nuclear drive.

Beijing, which now buys about 20 percent of Iranian crude, opposes the policy of the United States and its European allies seeking to strengthen U.N. sanctions against Iran.

Ok, great. But the picture is with North Korea president. Why? Naharnet, this is the only thing that you needed to do right when publishing an article.

This is a photo of Kim Jong Il, the Korean nut, and not the chinese pres.

This is a photo of Kim Jong Il, the Korean nut, and not the chinese pres.

The Chinese dictatorship Junta showing their true colors to the world. The Chinese are becoming more and more belligerent followed closely by Russia. I guess the Dark Side Dictatorship Club is becoming bigger... The danger to world Peace and security has reached a higher threshold.

You ppl are so dumb! How can you mix this guy with Kim if N Korea?

And then you claim you know politics...

China is the fastest growing economy in the world and the next super power.... and guess who will be be there by their side and who wont ;)

Ex - March 14 supporter and current imbecile, you gotta be some special kind of moron to come up with a comment like yours congratulations.

@congratulations on ur lobotomy: I'm just stating common facts..Some of us keep an open mind and stay up to date on events from around the globe and don't limit ourselves to what march 14 losers brainwash you. Maybe if you pick up the remote and change the channel from time to time you might learn a few things or maybe perhaps a new word other than the one word all u march 14 supporters keep recycling: "imbecile"