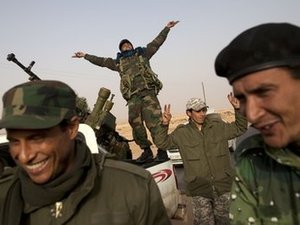 Libyan rebels were poised on Saturday for an attempt to retake Brega after breaching the key oil refinery town's defenses in a probing raid.

Rebel military spokesman Mohammed Zawi told Agence France Presse that a light mobile force had breached loyalist positions around Brega late on Friday, before pulling back for a renewed offensive early on Saturday.

A group of around 50 reconnaissance troops entered the town from the north, then pulled back four kilometers (two and a half miles) before midnight (22:00 GMT), Zawi said.

The probing raid on the front line between the rebel-held east and the mainly government-held west came some 32 hours after the rebel command launched a three-pronged attack against Colonel Moammar Gadhafi's forces, who were thought to have numbered around 3,000.

It also followed a morale-boosting recognition by major powers of the rebel administration as the legitimate governing authority in Libya, during a meeting in Turkey on Friday.

"Most of Gadhafi's troops seem to be at the centre," Zawi said.

Rebels were trying to dispose of more than 150 landmines already found outside the town, to make way for heavy artillery.

But the assault took a bloody toll, with at least 10 dead and 172 wounded, according to medics.

At a hospital in nearby Ajdabiya doctor Ahmed Dinari said most of the casualties were now caused by landmines rather than Gadhafi's heavy artillery, as earlier on in the offensive.

"We have had five more injuries this morning, all of them from mine explosions," he said.

Lying prone in "Bed 2," 19-year-old Ali Saleh said he had been in the central rebel column in the early hours of the morning when his armored personnel carrier hit a mine.

"We were very close to Brega at around three in the morning, then we got instructions from NATO to fall back and as we were falling back the vehicle hit a mine, destroying the chain track."

He was suffering from shock and a lightly damaged knee.

To the south of the town, where the rebels had made initial gains but suffered large numbers of casualties, Gadhafi forces had pushed back harder wounding many rebels with rocket fire.

Brega, nestled at the southeastern tip of the Gulf of Sirte, has changed hands multiple times during Libya's civil war, which soon enters its fifth month.

In raids near the Libyan capital Tripoli, aircraft took out a radar facility and a surface-to-air missile launcher, it said.

Brega's vast oil refinery and storage facilities -- if intact -- could provide fuel and a much-needed income stream for the rebels.

A victory would also provide a major boost for rebel morale, which had been sagging amid months of stalemate.

The fighters were buoyed on Friday by the news that in Istanbul the Contact Group recognized the rebels' National Transitional Council as "the legitimate governing authority in Libya" until an interim government is formed.

The Contact Group, which includes regional players as well as countries participating in the NATO-led air war against Gadhafi forces, "encouraged" its members, in a final statement issued after the meeting, to release funds to the cash-strapped rebel administration.

It urged countries which have frozen Libyan assets under U.N. sanctions "to open credit lines to the NTC corresponding to 10 to 20 percent of the frozen assets by accepting them as collateral."

A defiant Gadhafi called the Contact Group's recognition of the rebels "insignificant". He said he could not imagine the day "the heroic Libyan people would be represented by a fistful of traitors who opened the doors of Benghazi to crusaders."