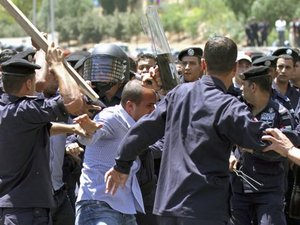 Four policemen suspected of attacking journalists at a demonstration in the Jordanian capital were arrested on Saturday, officials said.

"So far, four police officers suspected of being linked to the attacks on journalists have been arrested," said a statement from the criminal investigation department received by Agence France Presse.

At least 17 people, including journalists and policemen, were injured on Friday when police tried to stop clashes between pro-reform demonstrators and government supporters in central Amman.

Police used batons to break up the clashes outside city hall, beating and injuring nine journalists who were wearing orange vests marked "Press."

The injured included an AFP photographer.

Saturday's statement said CID chief "General Hussein Majali has formed a committee of inquiry into the attacks on the journalists who were simply doing their jobs."

Majali's department said on Saturday it would "announce the results of the investigation within the next 72 hours and refer to the courts those who have a case to answer."

Since January, Jordan has faced a protest movement demanding political and economic reforms and an end to corruption.