Mubarak Likely to be Tried in Red Sea Resort 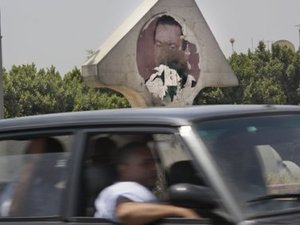 Ex-Egyptian president Hosni Mubarak's murder trial will most likely be held in the Red Sea resort where he is hospitalized, which is bound to anger activists demanding his transfer to Cairo, officials said on Saturday.

The 83-year-old former strongman has been detained in a Sharm el-Sheikh hospital since April, and he is due to go on trial on August 3 on charges of murdering anti-regime protesters and of corruption.

A judicial source said the location was decided after security services said it would be impossible to try him in Cairo.

Mubarak could either be put in the dock or questioned by court officials in his hospital room, where he receives treatment for a heart condition, with the rest of the trial proceedings taking place in a court room, the official said.

An interior ministry official told Agence France Presse the trial location "has not been completely settled, but Mubarak will most likely be tried in Sharm el-Sheikh."

It was not immediately clear whether his two sons, who face similar charges and are to be tried with him, would be transferred to a Sharm el-Sheikh prison from Cairo if the hearings take place there.

Protesters who have staged a sit-in for more than a week in Cairo's Tahrir Square, the epicenter of the demonstrations that overthrew Mubarak, demand his transfer to Cairo and accuse the ruling military of delaying the trials of former regime officials.

Funny how bigdig will never accept that Hezbollah be tried for anything.. What about the land they've taken off the Lebanese for their training camps or the people they kidnapped - or is that acceptable bigdig?

bigdig:
Dont worry about the location of the trial . You will decide when the small so called general (ha..ha...) will appoint you as head of the Court ! Good luck !

i guees bigdig you are talking about wahhab, berry, frangieh, lahoud.....