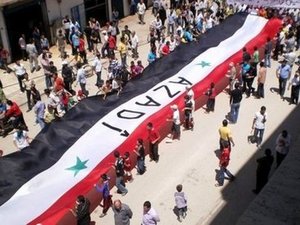 Hundreds of Syrian dissidents debated strategies to oust Bashar Assad's regime Saturday in Istanbul as U.S. Secretary of State Hillary Clinton called for a halt to the "brutal" repression of protests.

A simultaneous gathering scheduled to take place in Damascus was cancelled after at least 28 civilians were killed, including 16 in the capital, in demonstrations on Friday, activists said.

They said security forces arrested almost 300 people in a clampdown on the largest anti-regime rallies in four months that saw more than a million people take to the streets in the cities of Hama and Deir al-Zour.

Clinton told CNN Turk television on a two-day visit to Syria's northern neighbor: "The brutality has to stop. There must be a legitimate, sincere effort with the opposition to try to make changes.

"I don't know whether that will happen or not," she added.

Some 350 dissidents attended Syria's opposition meeting in Istanbul, which was held in a packed conference hall decorated with Syrian flags and began only after a minute of prayer for the victims.

"The Congress is expected to endorse a roadmap aiming to take the country from the state of totalitarianism and tyranny towards democracy...," organizers of the so-called National Salvation Congress said in a statement.

Participants came from various countries and belonged to many different opposition groups, according to coordinators.

"We have a paper with our view for the future, for changes in Syria, for democracy and freedom," Haitham al-Maleh, a senior opposition activist told Agence France Presse.

"We will see if anyone has any (objections) to our paper, we will make corrections possibly and then we will elect a group of maybe 15 people to continue working outside Syria.

"We will connect those inside and outside Syria," said the 79-year-old lawyer and human rights campaigner.

Opposition groups have held two other meetings in Turkey since anti-regime demonstrations began in March, as thousands fled across the border with Syria to escape bloodshed.

Some, mainly Islamist participants, had hoped Saturday to work towards forming a transitional government, but opposition member Burhan Ghalioun said it was too early.

"There's no point in that today, it's premature, no one is in favor of that," he said.

Ankara, whose ties with Damascus have flourished in recent years, has piled up pressure on Assad to initiate reform but has stopped short of calling for the Syrian president's departure.

But Turkey's frustration with his foot-dragging on reform has grown.

Last month, Prime Minister Recep Tayyip Erdogan accused Damascus of committing an "atrocity" against demonstrators, the harshest remark yet in Ankara's criticism of the security crackdowns, which activists say have claimed the lives of more than 1,400 civilians.

Clinton told CNN Turk television Saturday: "None of us really have influence other than to say what we believe and to encourage the changes that we hope for.... We don't know how this is going to end yet."

Commenting on the opposition meeting, the top U.S. diplomat said later during a press conference: "Efforts by the opposition to come together, to coordinate and define a program, forms an important part of political reform."

She described those attempts as "encouraging."

waist of time. As long as some have an uper hand (weapons) nothing will be achieved.

@joesikemrex waste of time !!
were you posting on scl ??