Gadhafi: I Will Never Quit Land of my Ancestors 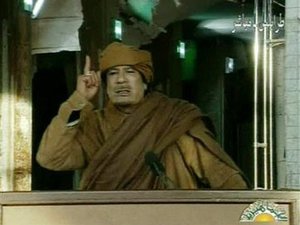 Embattled Libyan leader Moammar Gadhafi on Saturday told those calling on him to go that he would never leave the land of his ancestors and those who have given their lives for him.

"They are asking me to leave. That's a laugh. I will never leave the land of my ancestors or the people who have sacrificed themselves for me," he said in a loudspeaker address to thousands of people in Zawiyah, some 50 kilometers west of Tripoli.

"I'm ready to sacrifice myself for my people, and I will never quit this land sprinkled with the blood of my ancestors who fought Italian and British colonialists," he said of the five-month-long revolt against his rule.

Western and regional powers met in Istanbul on Friday for the fourth gathering of the Libya contact group, which saw a fresh call on Gadhafi to go after more than four decades in power.

"These rats have taken our people hostage in Benghazi, Misrata and the western mountains, using them as human shields," Gadhafi said of insurgents in the rebel capital in the east and port city in the west.

"Five million armed Libyans will march on them and liberate the occupied towns as soon as the order is given," he added.

Government forces retook Zawiyah near the border with Tunisia in March after two weeks of clashes with the rebels.