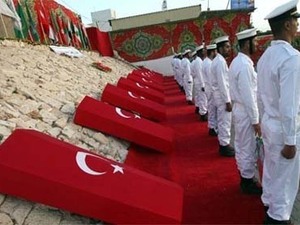 Israel's defense establishment wants to see ties with Turkey repaired, even supporting an apology to Ankara for a bloody 2010 raid on a Gaza-bound aid flotilla, Israel's Haaretz daily reported Sunday.

Relations between the former allies have been in tatters since the military operation, in which nine Turkish activists were killed when Israeli commandos raided a flotilla trying to breach a blockade on the Gaza Strip.

Ankara has demanded an official apology from Israel for the killings, but Israel has so far refused, in part fearing that such an apology could open the way for commandos who took part in the raid to be prosecuted.

But Haaretz reported on Sunday that defense and justice ministry officials have in recent weeks suggested that Israel could in fact head off potential lawsuits by Turkish human rights organizations by offering an apology.

Israeli lawmakers, including Foreign Minister Avigdor Lieberman, have said publicly that the Jewish state will not apologize for the raid, warning that expressing any such sentiment would be humiliating.

But Israeli officials also acknowledge that upgrading relations with Ankara is a high diplomatic priority and that the Jewish state would benefit from a return to the once-warm ties the countries had.