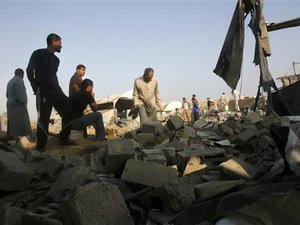 Seven people were wounded in Gaza on Sunday by what Palestinian medical sources said was an Israeli air strike, but Israel denied it had carried out any such raid.

But a spokeswoman for the Israel Defense Forces told Agence France Presse "there was no IDF activity in Gaza overnight or this morning."

The reported raid comes after days of rocket fire from Gaza into southern Israel and four straight days of retaliatory Israeli air strikes between Tuesday and Friday night.

The Israeli military said four rockets were fired from the coastal territory into Israel over the weekend, bringing to 20 the number of munitions -- including both rockets and mortar rounds -- fired from Gaza since July 1.

The uptick in violence comes after months of relative calm that followed a flare-up in tensions in April, when an anti-tank missile fired from Gaza hit an Israeli school bus, killing a teenager.

Israel responded with a series of air strikes that killed at least 19 Palestinians in the deadliest violence since Israel's devastating 22-day assault on Gaza in 2008-2009.

The violence raised fears of another similar offensive, but on April 10 Gaza's Hamas rulers declared a return to the truce that ended Israel's Operation Cast Lead in January 2009.