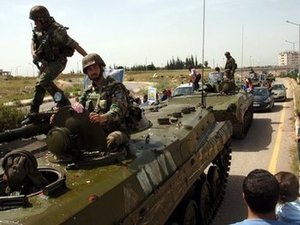 The Syrian army on Sunday set its sights on the town of Zabadani near the Lebanon border as it pressed ahead in its campaign to overcome an anti-regime revolt, a human rights activist said.

In the east, on the frontier with Iraq, security forces were also reported to be preparing to intervene in al-Bukamal after one man was reported killed there on Saturday.

Zabadani has seen several protests since demonstrations against the regime of President Bashar al-Assad erupted in mid-March.

"Four tanks and a troop transport took up position in Dawar al-Khalidiya" in the city, he said. "Residents organized a huge demonstration to protest against their presence."

On Saturday, Homs was the scene of clashes between regime supporters and the opposition.

Official media on Sunday reported an "explosive" situation in the eastern border town of al-Bukamal.

"The situation in al-Bukamal is explosive, so the army is preparing to intervene," said the pro-government daily Al-Watan.

"The authorities fear an armed revolt in this border town where (insurgents) can easily find logistical and political support."

One civilian was killed in the area on Saturday when security forces opened fire to break up an anti-regime demonstration, the Syrian Observatory for Human Rights said.

However, the official SANA news agency spoke of "armed terrorist gangs who stormed a government building and seized the weapons stored there," adding that three security personnel were killed and two kidnapped in the attack.

Since the anti-regime protests began, Damascus has consistently blamed the violence on foreign interference and "armed groups" seeking to "sow chaos."

Activists say the protesters are peaceful and that the fierce government crackdown has left more than 1,400 civilians dead and thousands of others behind bars.

Al-Watan said the "situation was back to normal" in the central city of Hama, the epicenter of anti-government protests earlier this month.

"The efforts the new governor of Hama has made with civic leaders have borne fruit. The state of civil disobedience which lasted 13 days is over," according to Al-Watan.

"With the help of residents, officials have started to remove the roadblocks erected on major thoroughfares."

Hama residents had raised barricades to prevent a military operation against the city, where memories of a 1982 crackdown against Islamists that left 20,000 people dead remain fresh.

Activists say security forces have killed least 25 civilians in the flashpoint city since July 5, when Damascus sent in tanks in response to an anti-regime demonstration that drew half a million people.

Meanwhile, security forces on Sunday rearrested Ali Abdullah, a key opposition figure who had been freed under a general amnesty in May, the Syrian League for the Defense of Human Rights said.

Abdullah was picked up during a "vast campaign of arrests" focused on Qatana, a town just west of Damascus.

One of the 12 signatories of the 2005 "Damascus Declaration" which called for Syria to move towards democracy, Abdullah had been released under a general amnesty Assad declared in May.

The 61-year-old author, who had served a sentence of two and a half years from December 2007 for "undermining the image of the state" and "spreading false news," had originally been set to be released in June 2010.

But he remained in custody to face a new trial over comments he had made while in prison on Syrian-Lebanese relations, and on alleged electoral fraud in Iran's 2009 election.

Meanwhile, Damascus was set later on Sunday for a music festival marking the 11th anniversary of Assad taking the oath of office as president.

He succeeded his father, Hafez, who died on June 10, 2000, after ruling the country with an iron grip for three decades.

ok the syrian army is ready !! but why the photo of abou l abed kabara is on the wall

First they wanted reforms, thinking that demands for reforms would confuse and corner the regime. When reforms began to be applied and meetings with many "local" opponents began to take place. This angered the US and France, and behind them Saudi Arabia (the real evil in the region) and Israel (Saudi Arabia's not-so-secret partner), and they became the confused ones. Then they lost it. Their real goal from the start was and continues to be the downfall of the regime. For God's sake, Saudi Arabia seeks reforms, BUT only in the countries that they despise. FOR GOD'S SAKE!!! Well, opponents cannot have it both ways. What they seem to not understand is that the regime, as bad as it might be, is a million times nicer and democratic than one run by the filthy Wahhabis and Salafi fundamentalists and the filthiest Syrian on the face of the earth Abdul Halim Khaddam. All of the Lebanese, and above all the Christian Sunnis among them, should know better. But these have shown to be dumb!!!

oh the all mighty Syrian army is attacking poor unarmed citizens, that's why these cowards are Hosballah heros, they are both the same a bunch of cowards.
I remember when the Isrealy army came in to Lebanon in the 80's the Syrian army were selling their uniformed and couldn't get away fast enough..

why doesnt he attack israel? and take back the golan heights? the syrian people are being killed by the syrian army. He does not have any army on the border with israel. i am so confused.
assad is a coward he only attacks innocent unarmed people.
I do not understand why the world is still watching and doing nothing about it.

all the other revolutions are people asking freedom but not in syria for M8!

then usa and france prefer assad in power because he is the one keeping the golan heights calm since its occupation!

I know how Lebanon feels (taught) anger against Israel. The "enemy". I have never lived in the great country of Lebanon but I am a reader. History gives your capital and country praise. The Paris of the ME, banking center of the ME, Land Of The Cedars...etc. I see a country that I would love to visit someday thrown over by a military coup. Say it hasn't been. Hizthrowup's arms equal or exceed the LAF's capabilities. There is enough history on all major players and parties to condemn them all. But look to now and the future and I can't belive what I see. A Lebanon in turmoil with the wrong "enemy". I would love to travel the ME with my daughter, learn a little Arabic, have her know history. Israel woul love to have a peace deal with Lebanon. Syria and Iran are in the way. If I see "occupation" or anything like it, I want to know who "occupies" Lebanon. May Peace be with Lebanon and Israel.

I realized I wasn't done:

Think of a nice peaceful area with Lebanon, Jordan, Eygpt, Syrian, Turkey, SA and others enjoying peace with Israel and Palastine? People from all over the world coming there, A combined Arab military alliance like NATO to protect civilians against dictators and terroists. A united ARAB front. Because of Iran and the puppets they control. Hizthrowup and Hamastards think they can eliminate a country? I'm assuming with such a claims comes backing from somewhere.

Ben. Your welcome to come anytime to Lebanon. However u should remember that the idf is made up of "terrorists". Haghana, made up most of the idf, and leaders like ariel Sharon, yitzach Rabin, moshe Dayan, dov hov. Then their was the Irgun terrorist group who became the Likud party and committed terrorist attacks like king David hotel and many massacres. The list goes on. 1 mans terrorist is anothers freedom fighter. It is not poor Israel that wants peace and evil Hezbollah, Syria and Iran who only want war. This is very naive or purposely misleading. There is a war game being played with Lebanon as one of the playgrounds or chess boards as usual. On one side you have, Israel, Saudi Arabia and the USA, and the other is Syria and Iran. This is always Lebanon's fate and will probably always will be. Pan Arabism is a farce. Lebanese have nothing in commen with the gulf Arabs or morocco except using the same alphabet.

Ado-Australia. Almost any country in the word before it came independent there were underground groups till became independent. What is difference between Ben Bela and his FLN group in Algeria ? Fiddel Castro in Cuba?
The revolution in Egypt 1952 the revolutions in Syria ? the resistance if France ? Even the Americans fought the British government,. Macarius in Cyprus and many others all over the world.
Freedom fighter do not blow up buses and schools, this is difference.
To compare the Haganah to Hamas or El Quaida is a shame to human race.