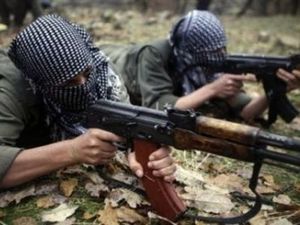 At least two Iranian Kurdish rebels and one member of Tehran's elite Revolutionary Guards were killed during clashes along the Islamic Republic's border with Iraq, the two sides said on Sunday.

The fighting, which also saw four rebel fighters wounded, comes less than a week after the Islamic Republic warned that it reserved the right to attack the bases of the PJAK, or the Party of Free Life of Kurdistan, in neighboring Iraq's autonomous Kurdish region.

"Since midnight (2100 GMT Saturday), heavy battles have been ongoing between PJAK and the Iranian army, resulting in injuries among elements of our group," rebel spokesman Sherzad Kamankar told Agence France Presse.

Kamankar said two rebels were killed and four wounded, and added that fighting was still ongoing.

Iran's official IRNA news agency, meanwhile, quoted an unnamed source in the Iranian border town of Sardasht as saying five PJAK members and a Revolutionary Guard were killed in the clashes.

The bodies of the five rebels were being "transferred to Sardasht," it said.

The Guards have detained an injured PJAK member and have "full control of the Sardasht border area," IRNA said. "The PJAK forces left lots of ammunition and escaped the area."

Jabbar Yawar, the top official in the Iraqi Kurdish ministry responsible for the region's peshmerga security forces, confirmed Iranian shelling of PJAK bases, but said he had received no reports of clashes and had no casualty toll.

According to Kamankar, Iranian forces have warned villagers living in areas along Iraq's side of the border to evacuate their homes within three days. Yawar, however, dismissed the claim as a "rumor".

The shelling came despite a warning on July 3 by the president of Iraqi Kurdistan, Massud Barzani, over the cross-border operations.