Gold Soars Above $1,600 Per Ounce for First Time in History 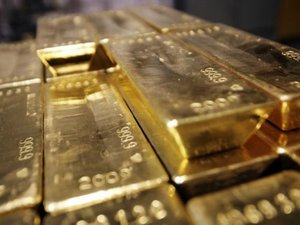 The price of gold surged on Monday above $1,600 per ounce for the first time in history, as investors bought the safe-haven metal amid deepening debt worries in the eurozone and the United States.

Gold jumped as high as $1,600.10 an ounce in early morning trading on the London Bullion Market, as the precious metal extended its recent record-breaking surge which began on Friday.

"Gold hit another milestone ... at $1,600 as investors lose confidence in the ability of politicians to get to grip with the debt problems weighing down on sentiment," said CMC Markets analyst Michael Hewson.

"More advances look likely while this lack of confidence prevails as investors plough capital into the asset."

The precious metal is regarded by most investors as a safe-haven in times of global economic turmoil.

This week, eurozone countries will seek to settle their debt crisis at an emergency summit to try and stop Greece toppling into default and dragging bigger euro economies into deeper trouble.

EU president Herman Van Rompuy has said the summit in Brussels on July 21 would focus on both the financial stability of the eurozone and future financing of the Greek program.

Meanwhile, U.S. politicians are wrangling over a deficit reduction plan which would allow President Barack Obama to avert a potentially catastrophic debt default in return for $1.5 trillion in spending cuts.

"Investors are now adding real fears of a U.S. default to go along with their European sovereign worries."

Markets slid last week as the eurozone debt crisis, which has already sunk Greece, Ireland and Portugal, showed signs of spreading to Italy and Spain.

Before the weekend, the European Union announced late on Friday that only eight of 91 European banks had failed so-called "stress tests" which were designed to assess their ability to withstand a worst-case economic scenario.

A ninth bank, Germany's Helaba, said it had failed according to the EBA's standards but passed on its own calculation.

financial armageddon is approaching rapidly,DEBT is the terrorist factor in this wold now.
the enormous problem will start when the interest rates begin rising across the world or inflation will be the worldwide beast.