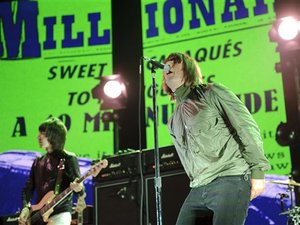 Rain turned to sunshine on the last afternoon of the Gurten Festival Sunday, as Liam Gallagher, Beady Eye's hard-rocking front man, charged through songs from their new album.

Former Oasis frontman Gallagher and his band took advantage of the timely change in weather, lifting the packed crowd with "Four Letter Word," ''Beatles and Stones" then rattled off "Millionaire" and "The Roller" — their updates on classic British rock.

The audience sang along, and band camarderie was strong — drummer Chris Sharrock threw a drumstick high in the air, and caught it without missing a beat on "Three Ring Circus," and similar antics from guitarists Gem Archer and Andy Bell — all former Oasis members — helped lift the crowd.

Liam's older brother, Noel — Oasis' former main songwriter, lead guitarist and backing vocalist — has announced that he, too, will be putting out a new album. The brothers' well-known antics and rivalry finally broke up the band, but at one time Oasis considered itself — and perhaps was — the biggest in the world.

But no one yelled for an Oasis' song Sunday, and there was a sense in the crowd that maybe they were seeing the beginnings of another great British band.

"You're beautiful!" Gallagher told an enthusiastic sea of faces, just before their last song in their hour long set.

The four-day Gurten Festival, atop the hilltop of the Gurten overlooking the Swiss capital and the Bernese Alps, began Thursday and ended Sunday. A small train takes festival-goers up and down the hill, and attracts thousands of music lovers each year.

This year's festival also featured the Arctic Monkeys, who played later Sunday, Jamiroquai, Kasabian and dozens of other popular bands.