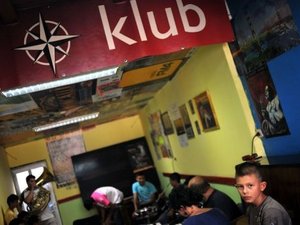 Discordant brass notes escape from a rehearsal room in Sliven's gypsy ghetto, as 15 local boys prepare for band practice and take a break from the poverty-stricken life of the slum outside.

"Now boys -- one, two, three...," band leader Angel Tichaliev calls out and the tunes merge into a bold, lively melody that resonates in the room barely bigger than a one-car garage.

The retired trumpet player formed the Karandila Junior band in 2007 to give a new chance for children and grandchildren of fellow gypsy musicians in this neighborhood incongruously named Nadezhda, or "hope" in Bulgarian.

"Music is a way to steal the boys away from the everyday reality in the ghetto and to keep the gypsy orchestra tradition alive," says the 56-year-old, who used to play in a military band.

In January, they released their first album called "Ghetto Hope", named after their run-down slum of 20,000 inhabitants where hope, indeed, is in small supply -- as it is for most of Bulgaria's 700,000-strong Roma community, one of the largest in Europe.

Crowds of ragged children jostle with horse carts in the narrow, laundry-draped alleys of Nadezhda -- notorious since communist times for its high levels of crime, illiteracy and poverty. Chickens peck for food outside the band's rehearsal room, oblivious to the loud music inside.

While Bulgarian Roma are still ghettoized and face rampant prejudice, "there's no such thing as discrimination when it comes to music," insists Tichaliev.

The band's compositions -- a blend of gypsy music, Bulgarian and Turkish folklore and even jazz and reggae -- have received a warm welcome from some of Bulgaria's leading composers and musicians and they have a run of upcoming gigs across the country and in neighboring Macedonia.

"People like us there because we make motley gypsy music where everything sounds natural," Tichaliev says.

His hope to open up new horizons for the boys, aged 12 to 18, seems to be paying off. For some, the Vienna trip was their first time abroad. Others are rethinking goals.

"My dad is a barber and he teaches me, but I want to become a musician," says Rumen, 15, patting his borrowed old trumpet like a pet.

Marian and Filcho, both 12-year-old clarinet players, think music might be a better option than their earlier dreams of becoming great football players.

All the boys play by ear, often improvising during performances. A few have started to learn to read music.

"We gypsies have a knack for it and can't do anything better than this," Tichaliev says.

He insists that all his boys go to school "even if I don't quite know how well they teach them there."

While he hopes some will study music seriously some day, his immediate dreams involve replacing the band's aging instruments and finding money for new performance suits since many boys have grown out of their old ones.

"Friends here and abroad help me financially but in Bulgaria hardly anyone ever takes it upon himself to lend a hand," he says. As for support from government Roma programs, they have contributed nothing, he shrugs.

Undeterred, Tichaliev is planning a second album for Karandila Junior and wants to form an even younger Karandila Mini band next year.

Candidates are plentiful, judging by the faces peeking in the window during rehearsals or sneaking into the room to listen. When Tichaliev steps away for a moment, 10-year-old Asen grabs a bass guitar almost twice as big as himself and plays to applause from other boys.

"Rehearsal's over. Cut out the cacophony," Tichaliev snaps and the boys scurry out onto the puddle-covered alley to head home along the concrete wall that hides their slum from Sliven's railway station.