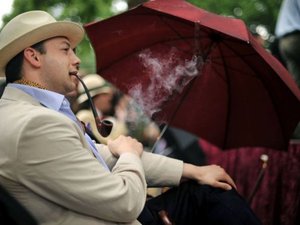 Wearing their finest tweeds, stroking their sideburns and filling the air with pipe smoke, competitors and spectators gathered for The Chap Olympiad, an annual celebration of the classic English gentleman.

Hundreds of "chaps" and "chapettes" descended on a leafy square in central London on Saturday for the sporting social occasion, where regular pastimes are overlooked in favor of smoking pipes, ordering butlers about and swilling cocktails.

The event is the annual summer bash of The Chap, a bi-monthly magazine celebrating the English gent, his eccentricity, courteous behavior, impeccable dress and devotion to facial hair. In its 12th year, it now has 10,000 readers.

"It's a sports day for people who don't like sport," said organizer Gustav Temple, The Chap's editor.

"It's unfair that chaps who spend most of their time filling their pipes, pressing their trousers and mixing dry Martinis don't get a chance to compete," he told AFP.

The 10 events include the pipeathlon -- sauntering, bicycling and being carried by servants while smoking a pipe -- butler baiting, ironing board surfing and moustache wrestling.

In the swooning contest, chaps "have to induce the ladies to swoon through any means possible".

The fun concludes with shouting at foreigners in an attempt to purchase an item, and umbrella jousting, where two contestants, armed only with their brollies and briefcases, charge at one another on bicycles.

"To be a chap is to take the mannerisms of an old-fashioned English gentleman, and take the bits that we like -- being eccentric, drinking cocktails before lunch, dressing exquisitely and being courteous to ladies.

"The rest, such as bloodsports and flogging manservants, we put that aside."

Meanwhile chapettes were shown the way by the Vintage Mafia, a group of ladies who were by their own admission "exceptionally well-dressed, but not always well-behaved."

The occasional torrential downpours did not dampen the spirits of those armed with a stiff upper lip.

Temple, 46, reckons Britain started losing its way with rock and roll, when youth culture, obsessed with being trendy, separated from the rest of society.

However, be believes all is not lost. Anyone can become a chap, starting with a wardrobe overhaul, shedding all garments made from denim or plastic.

"Once you've got the clothes, your mannerisms will change. You are not likely to get into a pub fight or end up at a football match," Temple said.

"You will find yourself drawn away from lager and crisps towards dry Martinis and a pipe.

"With a pipe, you feel like you should be putting the world to rights, speaking in clipped 1940s tones and pointing at things of relevance.