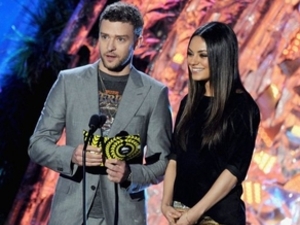 Hollywood stars Justin Timberlake and Mila Kunis have accepted YouTube invitations from two U.S. marines, one serving in Afghanistan, to accompany them to military balls.

And singer-turned-actor Timberlake and "Black Swan" star Kunis are having fun with the invitations by a male and female Marine, which went viral on the video-sharing site last week.

"Marines have a lot of balls," Kunis told the Today show on MSNBC on Monday, confirming that both of them had accepted their invitations to separate balls in November.

"We want to pay honor to our country and embrace their balls," added Timberlake, who starred in last year's Oscar-winning Facebook movie "The Social Network."

The story started when a Marine Sgt. Scott Moore, stationed in Musa Qala, southern Afghanistan, posted a video on YouTube inviting Kunis to the Marine Corps Ball on November 18 in Greenville, North Carolina.

Kunis, who co-starred with Natalie Portman in last year's sexually-charged hit movie "Black Swan," was asked about the invite during a press interview and spontaneously said she would go.

That prompted female marine Corporal Kelsey De Santis to issue an invitation to Timberlake -- co-starring with Kunis in a new movie "Friends With Benefits" -- to a Marine Corps Ball on November 12 in Washington DC.

"So Justin you wanna call out my girl Mila, well I'm gonna call you out and ask you to go to the Marine Corps Ball with me," said De Santis, who is stationed in Virginia and is a martial arts expert.

Timberlake confirmed he will attend, quipping: "I don’t get asked out, ever. So, I was very flattered by that. And I hear that she's trained in martial arts, so I'm hoping we can tussle at some point.

"That last bit was a joke," he added.

And it doesn't stop there: on Friday veteran US comedy actress Betty White, 90, was invited to a marine ball by Sgt. Ray Lewis, who has served in Afghanistan and Iraq.

But the 89-year-old declined, diplomatically. "I am deeply flattered and truly appreciate the invitation, as everyone knows I love a man in uniform," she said, in a statement forwarded by her publicist.

"But unfortunately I cannot accept, as I will be taping an episode of 'Hot In Cleveland,'" she said, referring to her hit show about three aging showbiz veterans who find renewed fame when they unexpectedly land in Cleveland, Ohio.