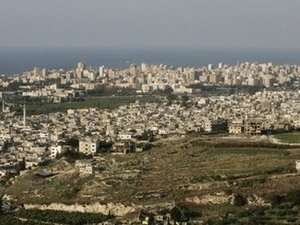 The Ain el-Hilweh Palestinian refugee camp that lies near the southern city of Sidon is witnessing an unprecedented mobilization of militants, al-Joumhouria newspaper reported on Thursday.

Fatah al-Islam and Jund al-Sham are no longer active, it said, adding that the new terrorist groups linked to al-Qaida are Jabhat al-Nusra and Abdullah Azzam Brigades.

According to the newspaper, the number of militants that have received training and arms has reached 120. They mainly spread in Ain el-Hilweh's al-Taware' neighborhood under the leadership of Haitham and Mohammed al-Shaabi.

As for fighters located in al-Manshiyyeh, they follow the orders of Toufiq Tah and those in al-Tireh are led by Bilal Bader.

Around 70 members of Takfiri groups have entered Ain el-Hilweh in the past week, al-Joumhouria said.

Fadel Shaker, who was once a pop idol and is located in al-Taware neighborhood, is also leading a group of young militants, the newspaper said.

Shaker disappeared as a gun-toting hard-liner in a shootout with the Lebanese army in Sidon in June.

Sheikh Ahmed al-Asir, who has also disappeared along with Shaker, his most famous disciple, has left Ain el-Hilweh months ago and is likely to be residing in the Syrian border area of al-Qalamoun, al-Joumhouria said.

It said that the head of the Mujahedeen movement in Ain el-Hilweh, Sheikh Jamal al-Khattab, is playing a huge role in mobilizing the fighters.

According to the daily, one of the suicide bombers who struck the Iranian Embassy two weeks ago, Moein Abu Dahr, had received training in al-Taware before heading to Syria.

He later came back to Lebanon and targeted the embassy along with Adnan Mohammed, a Palestinian.

The February 14 Saudi-Wahabi terrorist coalition must be rejoicing.

How about their tag team partners the Israeli-US-cannibals, are they not rejoicing as well?

Oh please mr flimflamthrower post that amazing link again, after hearing the villagers testimonial I just have to read it :-)

but hizbushaitan went to Syria to fight these extremists so theey do not pose a threat to Lebanon!
how did they come here?
silly Iranian terrorist extremist militia!

like you hezbi lovers equating that hezbis in syria will protect lebanon!!!! LOL
proof of a bigger silliness....

Meanwhile back in the mountains of Peshawar, Pakistan, ice-man and his fellow Salafist terrorists eat kabsa while playing with their toes and crying over the death of bin Laden.

@Southern : Hezbollah is not a Jihadist project ? The very essence of Hezbollah is Jihad, weapons, war, fighting and killing !

So stop your lies and nonsense ! No one but you and your likes believes them.

There is no difference between Hezbollah and other "jihadist". Same brainwashed extremists fighting for different extremes...

The army and Hizbollah along with Palestinian police should go in there and smoke these terrorists out and dump them in the sea with their hero Osama bin laden. Let the fish eat them.

In the meantime, you are speaking BS...

Is this all you have to say ?

PS : Many Hezbollah officers speak Hebrew ... this is how they negotiate and pass on orders between Israel and Hezbollah.