A Film for Foodies: Culinary Creativity at elBulli 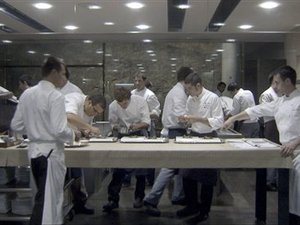 For a foodie, the new film about Spain's renowned elBulli restaurant is a bit like an Angelina Jolie movie for a teenage boy.

That boy's never going on a date with Angelina. And sorry, dear foodie, but you're never gonna eat at elBulli.

And for some, perhaps close to tragedy, too. Co-owner and chef Ferran Adria announced earlier this year that on July 30 he will close his restaurant, a winner of three Michelin stars and countless other honors. Citing financial struggles and a need to regroup after years of exhausting work, he said elBulli would become a think tank and research facility.

German filmmaker Gereon Wetzel had no inkling of this when he shot his film, training his cameras on elBulli's creative team for 10 hours-plus per day, a week at a time, over 15 months in 2008 and 2009.

But the news, which came during editing, didn't change his goal, which was to show the laborious, indeed painful, process of creating art — in this case, edible art, dishes for an ever-changing menu of 30 to 50 courses that can take three, four, maybe five hours to eat, for 50 lucky diners a night. Just a few names give you a sense of their unique nature: A gorgonzola tree. A parmesan crystal. A coconut sponge. Iced peppermint. "Vacuumized" mushrooms.

Or vanishing ravioli — with a pasta envelope, coated in maltodextrin, that literally disappears in front of your eyes.

"What fascinated me was the process," Wetzel said in an interview this week from his home in Munich. "How do they do it? What does it take to get to these ideas?"

And so the 38-year-old director, who by the way professes not to be a foodie, spent most of his shooting time not at the restaurant, which is on the coast a few hours from Barcelona and is open only six months a year, but in its lab in the city. There, a few top chefs spend the other six months creating the next season's menu.

The work Wetzel displays is more than painstaking. Adria's main deputies, Oriol Castro and Eduard Xatruch, labor and philosophize over the consistency of a mushroom. What happens when you "vacuumize" it? (A machine is used.)

And what can we do with a sweet potato that's never been done? What can we extract from it? All this is shown with no narration whatsoever.

"This is very hard work, and I wanted people to see that," says Wetzel. And so he didn't shy away from the difficult moments, including one where chef Adria berates his team for having lost some data on a bad hard drive. The team protests that they still have lists on paper. "I don't want it on paper, I want it on the computer!" Adria retorts. "This is a disaster." At another point, he rejects a dish curtly: "Don't give me anything that's not good."

There are also some unintentionally very funny moments, like when the two chefs go to the local market and ask for five single grapes for their testing — and three beans. "You get away with everything," remarks the merchant.

At another market visit later on, they ask the merchant not to discard the tongue of a fish. Anything might be fodder for a new creation, after all. Wetzel notes how Adria's team also works with the cartilage of a calf shoulder — something others would surely throw away. "For them, the way they work, this cartilage has value equal to caviar," he says.

After the film has spent a good hour showing painstaking lab work — Rachael Ray's cooking show, this is not — the action shifts to the coast, and opening day of the new season. We see an army of new workers, some of them interns, who have come from all corners of the world to work with these Spanish masters.

And as the staff revs up for the incoming crowd, Adria and his lieutenants are still refining, experimenting, tasting. Adria sits down for a rehearsal of new dishes. The tension is almost unbearable as he tastes one, then says nothing for many seconds.

We also see the birth of a new, typically elBulli dish: A silky cocktail of hazelnut oil, water and two crystals of salt. Testing such a cocktail at one table, a server comes back in a panic: Fizzy water has mistakenly been used, instead of still water. The chefs consult. Maybe they should keep it fizzy? Maybe that will make it even more interesting!

During three years of overall work on the film, there was one thing Wetzel and his team never did: Taste the famous food they were documenting.

But once shooting was complete, they finally got a table.

"To spend five hours doing nothing but thinking and talking about food — it was an experience," he says. And a relief, too.

"After all that time and work, I was just so glad that it was really, really good," he says.