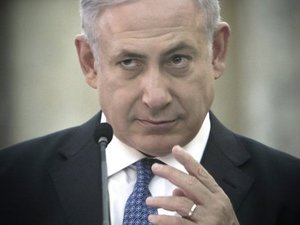 Israel is willing to hold peace talks with the Palestinians immediately, in Jerusalem or even Ramallah, Prime Minister Benjamin Netanyahu said in excerpts of an interview released on Wednesday.

Speaking to Arabic-language television station al-Arabiya, Netanyahu also denied that Israel wanted to see Syrian President Bashar Assad remain in power, and acknowledged that he had held secret peace talks with Damascus in the past.

The Israeli premier blamed a stalemate in talks with the Palestinians on their leadership.

"Everything is on the table," he said. "But we need to get to the table."

He said the Palestinian leadership had in the past not wanted to conclude negotiations, and now it was unwilling to even restart talks.

"I'm prepared to negotiate with president (Mahmud) Abbas directly for peace between our two peoples right now. We can do it here in my home in Jerusalem, we can do it in Ramallah (in the West Bank), we can do it anywhere," he said.

Peace talks between Israel and the Palestinians have been on hold since late September 2010, shortly after Washington re-launched the first direct negotiations between the two sides for nearly two years.

The talks ground to a halt when Israel's partial freeze on settlement construction expired and Netanyahu declined to renew it. The Palestinians say they will not hold talks while Israel builds on land they want for a future state.

The prospects for new talks have been thrown into further jeopardy by a reconciliation deal between Abbas's Fatah party and Hamas, which rules Gaza.

Netanyahu said it was impossible to seek peace with any group that does not recognize Israel's right to exist.

"If people say no, the state of Israel shouldn't exist, it should be wiped off the face of the earth, the way Iran or Hezbollah or Hamas say, there's not much place to go."

But he acknowledged that he had held peace talks with Damascus in the past and was concerned that anti-regime protests could lead to a rise in the long-quiet border between Israel and Syria.

"We don't intervene in what happens in Syria, but we obviously would like to have peaceful relations," he said.

"Several people tried including myself in secret negotiations to move towards a formal peace," he added.

Netanyahu said it would be counterproductive for Israel to offer support for pro-reform demonstrators in its neighbor, and that he hoped Israel would not see tensions on its border rise as the uprising continues to shake Syria.

"I hope that no one in Syria thinks of having a distraction... to heat up the border between us. And I hope that Iran or Hizbullah are not tempted to do this in order to shift attention away from what's happening in Syria."

What a joke! you and hizb should just get lost! Peace is only achievable when peace is sought, talk is cheap