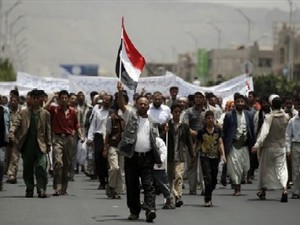 Yemen's opposition is to form a coalition to unite its various strands ahead of the return of President Ali Abdullah Saleh, who is hospitalized in Saudi Arabia, a spokesman said Wednesday.

A preparatory committee on Tuesday night approved the creation of a "national coalition council," Ahmed al-Sabri, the spokesman for the committee, told Agence France Presse.

The aim is to bring together the Common Forum parliamentary opposition parties, the young protesters, the Southern Movement, which advocated southern secession but in May said it would support a federal system, northern Shiite rebels, civil society representatives and others, Sabri said.

The preparatory committee would announce the national coalition council on August 1, he said.

Its mission would be to re-launch protests against Saleh, who was wounded in an early June bomb attack on his Sanaa palace and has been hospitalized in Saudi Arabia for more than five weeks, he added.

The council aims to end divisions among the various components of the opposition.

"The leaders of the protests do not act in coordination," one opposition member said on condition of anonymity, citing divisions between northern Shiite rebels and the al-Islah Sunni opposition.

"There are doubts among certain protesters about the intentions of dissident General Ali Mohsen al-Ahmar," with some wondering if he is in fact an ally of the regime, he added.

Ahmar commands Yemen's northwest military district but, along with several other generals and a number of troops, has declared his support for anti-Saleh protesters.

Also illustrating divisions among opposition members, a group of protesters on Saturday announced the creation of a 17-member "presidential council" to run the country in the event of Saleh's departure, which has not been well-received by other sections of the opposition.