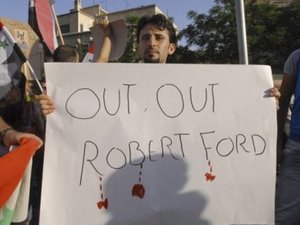 Syrian Foreign Minister Walid Muallem warned the French and U.S. ambassadors on Wednesday not to travel outside Damascus without permission from the authorities, after they both visited the flashpoint central city of Hama earlier this month.

"We will impose a ban on any (diplomatic) travel more than 25 kilometers outside Damascus, if the ambassadors continue to ignore (our) guidance," Muallem told the envoys at a meeting broadcast by state television.

"I hope that we will not be forced to impose the ban," he added.

"We did not expel the two ambassadors because we had hoped to maintain better relations in future."

Both U.S. envoy Robert Ford and French ambassador Eric Chevallier visited Hama on July 7 amid repeated large demonstrations in the city against the rule of President Bashar al-Assad.

Damascus reacted furiously to the visit, accusing the U.S. ambassador of seeking to undermine the stability of Syria and calling in both envoys for consultations on July 10.

The Syrian authorities accused the pair of traveling to Hama without authorization but Washington insisted Damascus had been notified in advance.

"The U.S. ambassador met with saboteurs in Hama ... who erected checkpoints, cut traffic and prevented citizens from going to work," an interior ministry statement said at the time.

The foreign ministry called Ford's presence in Hama "obvious proof of the implication of the United States in the ongoing events, and of their attempts to increase (tensions), which damage Syria's security and stability."

U.S. State Department spokeswoman Victoria Nuland said she was "dismayed" by such criticism and stressed that Syrian authorities knew of the visit in advance.

Embassy press attache JJ Harder insisted Ford "certainly did not incite anyone to anything".

"He met with average Syrian citizens and received a warm welcome," Harder said.

Ford "wanted to see with his own eyes what was happening on the ground," as "the lack of uninhibited access for international media makes this even more important."

If they assassinate the ambassadors, USA and France will turn Syria into a parking space.

The days where they could blow up the ambassador of the US Frank Melloy, or gun down the ambassador of France Hubert Delamare at a stonethrow from a syrian military checkpoint are long gone! Khadafi knows something about it, binladen too!

they are scared... really scared

they kissed asses to have a USA ambassador !!

I doubt this idiot holding up the sign knows what it says, probably he cannot read arabic, let alone read and write in english.

it will not be long b4 treating syrias allies in lebanon the way they deserve.
" i forgive my enemies,but never forget their names."john f.kennedy.
BILAD EL ARZ WILL PREVAIL AND THE SKY IS THE LIMIT.

They don't even scare the average Syrian living in Syria, do they really think they scare ambassadors?

The Criminal Syrian regime (with its henchmen (and women) in command Maher El Assad, Assef Shawkat, Bushra El Assad, Bahjat Suleiman...) knows its reaching its end game, they are getting more and more belligerent in desperation. The Criminal regime thinks it can terrorize Ambassadors into submission the way it does its people to get its way. It's in for a very big surprise!! This time it has bitten off way more than it can chew or swallow for that matter. The Syrian regime's demise is inevitable and unfortunately quite violent. The Free Syrian people will prevail in the end! Democracy and Peace will come to Syria no matter what the criminal Assads do to prevent it from happening. THE PEOPLE HAVE SPOKEN!! The Assads must step down and face justice for all their crimes...