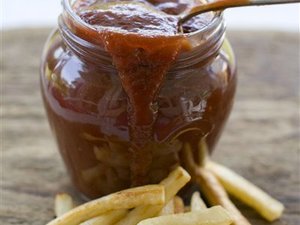 There's a seasonal shift going on in the condiment firmament. Ketchup, the big red staple of American pantries, is catching up with the cool crowd as chefs and food entrepreneurs seek new inspiration.

Organic ketchup, spicy ketchup, gourmet ketchup, curry ketchup, all have blossomed in recent years, a development that James Oseland, editor-in-chief of Saveur magazine, has noted with approval. "Who doesn't love a good catsup?" he points out.

About the whole ketchup vs. catsup thing — like tomato vs. tomahto, this seems to be a matter of personal choice. Oseland uses both depending on his mood.

The big tomato in American sauce, of course, is Heinz, which launched its ketchup in 1876. Interestingly, this wasn't the company's first venture; Heinz began with a horseradish sauce in 1869. Today, more than 650 million bottles of Heinz ketchup are sold worldwide, adding up to more than $1.5 billion in annual sales.

Tradition is part of the appeal of Heinz; this year the company brought back the classic glass bottles for a limited time in stores. This is the bottle with the "57" on the neck denoting the "sweet spot" one taps to get the ketchup to exit at maximum velocity. But Heinz, the market leader, also has been part of the changing sauce scene, expanding its products to include a no added salt version, organic ketchup, a Hot & Spicy bottle with a kick of Tabasco sauce, and Simply Heinz, which uses sugar instead of high-fructose corn syrup.

Hunt's and Del Monte are two other big names in U.S. ketchup; additional brands that have found a place on the shelf include Annie's Naturals Organic Ketchup, Muir Glen Organic Ketchup, Organicville Tomato Ketchup and Stonewall Kitchen Country Ketchup, a product described as "ketchup all grown up."

Norton and Ramadan's ketchup chronicles began about three years ago when they started cooking homemade tomato ketchup as economics majors at Brown University.

"We love ketchup," explains Ramadan. They thought it was curious that there only a few dominant brands of ketchup, as opposed to mustard, for instance, and thought, "wouldn't it be fun to try to make something in our own kitchen."

They held tasting parties and came up with two flavor profiles, classic and spiced, now available online and in stores including Williams-Sonoma and Whole Foods Market. The ketchup, billed as having less sodium and sugar than leading brands, is sweetened with agave nectar, honey and raw brown sugar and includes apple cider vinegar for a tangy kick. Other ingredients include coriander, lime juice, allspice, cilantro and cayenne pepper.

In some ways the concept of gourmet ketchup sounds slightly oxymoronic. Ketchup, a burger's best friend, is unabashedly of the people and a product that tends to stir strong opinions. The question of eggs, to sauce or not to sauce, can be particularly thorny and describing someone as calling for ketchup in a fancy restaurant is shorthand for gaucherie.

Oseland didn't much care for ketchup as a kid, but was won over as an adult, probably after trying french fries with the accompanying foil packet of sauce. Since then he's "absolutely grown to appreciate ketchup as really one of the most blessed condiments."

He notes that many overdo it and drown their food, not a good plan. But the idea that ketchup lacks cachet is "just patent foolishness." He's tickled when sitting in a posh, white tablecloth restaurant and "a beautiful silver-plated tureen of ketchup comes out. In fact, it doesn't seem inappropriate at all. It seems, 'At last ketchup has arrived,' and rightfully so."