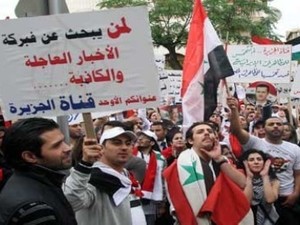 Syria has apologized to Qatar for an attack by demonstrators on its embassy in Damascus that prompted it to suspend work in the strife-torn country, an official in Doha said on Wednesday.

"Syria has sent a letter of apology to the Qatari ministry of foreign affairs," the Qatari official said on condition of anonymity.

A diplomatic source in Doha said protesters had attacked the embassy in Damascus with stones and eggs on July 11, the same day they had targeted U.S. and French diplomatic missions in the Syrian capital.

An official from the Qatari delegation to Syria told Agence France Presse on Monday that Qatar's ambassador to Damascus, Zayed al-Khayarine, had quit Syria and the embassy had suspended its work.

"The diplomats have left Syria and work has been suspended until further notice," the official, who declined to be identified, said while refusing to specify the date of the ambassador's departure and reasons for leaving.

Qatar had long enjoyed cordial relations with Damascus but recently Al-Jazeera, the Doha-based pan-Arab satellite news channel, has come under strong criticism by the Syrian authorities for its coverage of the popular revolt against President Bashar al-Assad's regime that erupted in mid-March.

Damascus deems Al-Jazeera to be exaggerating the protest movement.

In late April nearly 100 people gathered outside Al-Jazeera's Damascus offices, accusing the channel of "lies" and of "exaggeration" in its coverage of the protests.

Syrian Foreign Ministry to Qatar FM: Ooops...We meant to send our goons to another Embassy...our bad.