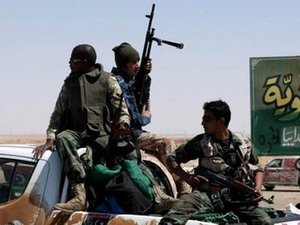 Military leaders from the rebel-held Libyan city of Misrata asked French President Nicolas Sarkozy on Wednesday for extra aid to defeat ruler Moammar Gadhafi, a member of their delegation said.

"Insurgent commanders came to explain to the head of state that the keys to Tripoli are in Misrata because Misrata's fighters are disciplined, battle hardened and they have a key asset: a military victory already won" against forces loyal to Gadhafi, Bernard-Henri Levy told Agence France Presse after the meeting.

French writer Levy has been an ardent supporter of the Libyan revolt and attended the talks at Sarkozy's Elysee palace alongside rebel General Ramadan Zarmuh, Colonel Ahmed Hashem and Colonel Brahim Betal Mal.

France is taking part in NATO-coordinated strikes against Gadhafi's military assets and was the first outside state to formally recognize the rebels' Transitional National Council.

Misrata insurgents hope that France will provide similar support to that given to the rebel enclave in the Nafusa Mountains, southwest of Tripoli, the source said.

France in June said that it had delivered weapons to rebels there to help defend themselves against Gadhafi's forces.

Misrata, around 200 kilometers east of Tripoli, has been controlled by rebels since mid-May, after a two-month siege by Gadhafi forces.