Military Official: Egypt Cabinet to be Sworn in Thursday 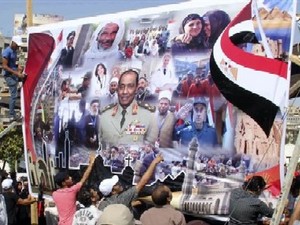 The new Egyptian cabinet is due to be sworn in on Thursday, a military official said, three days behind schedule after last minute negotiations and the prime minister's admission to hospital.

"The new ministers in Prime Minister Essam Sharaf's government will be sworn in on Thursday in front of the head of the Supreme Council of the Armed Forces, Field Marshal Hussein Tantawi," the official told the state MENA news agency.

The new cabinet had been due to take the oath of office on Monday, but the ceremony was postponed for a day amid protests over the embattled premier's choice of ministers.

On Tuesday, the government said that Sharaf had been admitted to hospital overnight suffering from exhaustion and would spend the day resting before finalizing the new cabinet.

Television footage showed Sharaf attending a parade to mark the 200th anniversary of the military college on Wednesday morning.

He was shown sitting alongside members of the Supreme Council of the Armed Forces, which took power in February when veteran president Hosni Mubarak was ousted by a popular uprising.

Sharaf, who heads a caretaker government, had hoped the sweeping reshuffle would persuade protesters to end a sit-in at Cairo's Tahrir Square.

Fourteen new ministers and a deputy premier had been expected to take the oath.

But the protesters complained that the new cabinet retains ministers they wanted sacked, including Justice Minister Abdel Aziz al-Gindi, whom they accuse of delaying trials of former regime officials, including Mubarak himself.