Charbel Refuses to Give Up on Rifi: Security Situation under Control 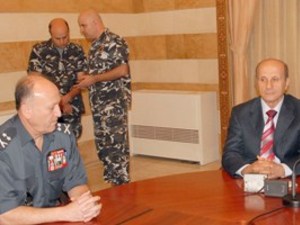 Interior Minister Marwan Charbel said on Thursday that he will not give up on Internal Security Chief Maj.-Gen. Ashraf Rifi, al-Mustaqbal newspaper reported.

“Rifi is one of the best officers committed to implementing the law,” he told the daily.

Charbel also stressed the importance of “placing all weapons under the state’s authority.”

He praised the role of the ISF Intelligence Bureau that “succeeded in carrying out its tasks, although it had experienced failure at some points,” therefore refusing to “cancel its role.”

In addition, he rejected statements saying that he had interfered in the issue of appointing Intelligence Bureau chief colonel Wissam al-Hassan as an ambassador.

Regarding the appointment of the head of airport security, Charbel told al-Liwaa newspaper in remarks published on Thursday that this issue doesn’t undergo any sectarian principles, stressing that this post was never exclusive to a certain sect.

Meanwhile, he told An Nahar daily that the security situation in Lebanon is “under control.”

However, the minister urged officials to return to the national dialogue table that President Michel Suleiman had called for.

“Calm will be reflected positively in Lebanon, while quarrels will develop into disputes,” he the Interior Minister remarked.

Concerning the Special Tribunal for Lebanon probing the assassination of ex-Premier Rafik Hariri, Charbel noted: “It’s in no one’s best interest to destabilize the situation… Everyone will lose during any security tension.”

An Nahar quoted him as saying: “A certain protocol has been set regarding the arrest warrants against the four members of Hizbullah… the general prosecution is handling the issue, it tasks the specialized security department to carry out the investigation.”

The STL released arrest warrants against four Hizbullah members suspected of being involved in Hariri’s murder.

Asked about the release of the seven Estonians, the interior minister denied statements saying that the Lebanese state had nothing to do with the issue.

Charbel emphasized that it followed up on the case from the very beginning, revealing that he had met with U.N. Special Coordinator for Lebanon Michael Williams a day before the release of the Estonians, reassuring him that the issue will be resolved.

Regarding the issue of the Lassa village and the attack against a Maronite League delegation and the MTV film crew, he stressed: “The situation has become unbearable, and the ministry refuses to leave the situation as it is.”

The minister said that the electoral law is being discussed and will be ready in “three months at most.”

“I am doing my duties and the decision is in the hands of the parliament,” Charbel stated.

Every soldier is loyal to his mother land, Rifi made a mistake like every human under pressure of left and right, this never mean he is disloyal to his nation. Lebanon should benefit experience from every source to serve nation not political parties. Salute to Charbal who stood firm in his conviction and got his ministry well started in political values.

Placing all weapons under the state’s authorities is a real concern for the majority of the nation.
I wish we could see it one day in black and white.