Bkirki: Lassa Dispute Not Political, But Rather on Property Rights 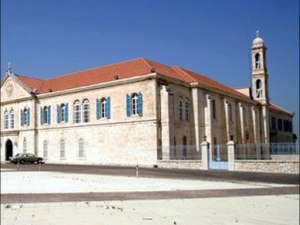 The dispute in the Jbeil District town of Lassa is not between political parties or movements, it is rather a property rights dispute and it will be tackled in a spirit of dialogue and coexistence, the media department of the Maronite Patriarchate said Thursday in a statement.

The conferees reached an agreement under which the committee tasked with surveying lands would resume its work in two months and the two sides would halt provocative media statements.

The survey of lands in the Jbeil District town of Lassa will also resume in two months, MTV reported on Wednesday.

The Bkirki meeting comes after Hizbullah members last week prevented a Maronite League team from surveying land owned by the Maronite Patriarchate in the predominantly Shiite town of Lassa in the Jbeil District.

It also comes after members of the same party prevented an MTV crew from filming a report on the issue in the town.

Opposition sources have interpreted the recent attacks against the Maronite League team and MTV staff as the early signs of Hizbullah’s “dominance” over the new majority, reported the daily An Nahar Thursday.

“This gives the opposition complete credibility in waging its long battle with the government over Hizbullah’s possession of arms and its call that this issue be the only article on the national dialogue’s agenda,” they added.

The daily said that the talks focused on the disputed lands it Lassa, with an agreement being reached that a survey would be conducted over land that is not a subject of a dispute.

Another survey would be held over disputed territory and then a final survey over land that has been subject to construction violations, it revealed.

The gatherers also agreed to confront any violation on disputed land or property owned by the church.

Construction in the area can only take place through an official license, they stressed.

Meanwhile, Change and Reform bloc MP Simon Abi Ramia, who is a member of the follow-up committee, told Al-Jadeed television after the Bkirki meeting that “the issue of Lassa was blown out of proportion by the media.”

“The dispute erupted in the 1940s and the property is neither Maronite nor Shiite and there is a committee that will follow up on the issue transparently and clearly and we have set a timeframe for finalizing the issue of the land survey,” Abi Ramia added, stressing that “things are back to normal.”

The committee is tasked with coordinating and preparing for upcoming Maronite meetings in Bkirki. The committee formed subcommittees tasked with tackling the issues of lands owned by Christians, administrative appointments and other topics.

The meeting, which was chaired by Maronite Patriarch Beshara al-Rahi, was attended by “Hizbullah officials Ghaleb Abu Zainab and Hassan al-Moqdad,” MTV said.

Does any one need more proof that this hizb has become a devilish cancer that needs to be extracted? If there is a dispute about an issue in any country, the government, the authorities, the security and legal agencies would normally handle it. Here, we have 2 states, 2 armies (one effective and the other ineffective). So the 2 states sit across a table to resolve disputes over matters of concern. It is sickening.... I want to vomit....!

Why did the turban heads ask for 2 months?? What are these thugs planning...?

LOL! Where were the March 14 Christians when the Saudi baboons canceled Good Friday?! HAHA...March 14 is a joke!

With due respect, your Excellency the Patriarch, I think holding and attending this meeting with these thugs was a mistake. I have the utmost respect for you, but you've just given them legitamcy ! The local and national authorities should deal with issues of this nature not a person of your stature. If indeed the problem was between 2 communities, and you want to solve it the Lebanese way, then at least a meeting with MPs of the different communities should suffice. But, those who attended on behalf of the Shiites are not members of parliament but rather members in what many believe to be an outlaw organization. This sets a precedence that will prove costly in the future!
I apologize if I unintentionally may have offended anybody.

MP Walid Khoury to MTV: The survey commission took a decision to go to the village of Lassa without coordinating with anyone. Hizbullah has nothing to do with the issue.

Are you kidding me.......!!!!!!! ..and who should they coordinate with? I did not know that now we need to coordinate every outing, every step, every breath with Hizbullah and the shiites for fear they would beat us up, or even shoot us. You are truly a retarded politician. I guess Lebanon deserves politicians like you.

I'm too disgusted to even comment on this article. They are right though....

At least she was dancing with a Lebanese flag not with Syrian or Iranian flags, like many of hezboshaitan do. Why some Lebanese have the privelage to serve the interest of the Syrian and Iranian above the Lebanese people interest and a woman can't dance with Lebanese flag on stage. I really dont see a problem.
The real problem in Lebanon is Hezbollah and their crimes against the Suni moslem including their terrorist activities.

To Someone, not defending the previous governement decision, but good friday was removed to be replaced by a monday, so that everyone is happy, and by the way i dont mind a monday is even better its a long weekend at this time of the year, so stop with your stupid propaganda and go talk about Lassa, where the supposedly ''respectful '' Hezb attacked officials of the maronite league and tv crew. What a shame, and to March 14th, instead of talks talks talks, you should have realised by now the only way to stop this real zionist irano-syrian militia of disgust to take over, is start arming up yourself and putting trained people in the still '' free '' regions of Lebanon so that it can be protected from these thugs, words are nothing for them, what we need is a balance of power, this is the only way the Hezb is going to stop intimadating others. So start working from your side for security and helping citizens because there is no state anymore , accept the reality and fight for a new one.

LOL @ Pacifier..."So that everyone is happy." If by everyone you mean the Saudi baboons (March 14), then yes, they were REAL happy! March 8 has ended Saudi Arabia hegemony in Lebanon; we should all thank them!

Ya Hizb and ya Lasa, do not test our patience and do not even consider it as a point of weakness. Many before you tried and we know what happened to them. So you should go and brush up on our Lebanese history before you continue with your stupid acts that will lead you to nothing more than regrets.