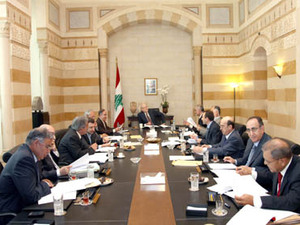 A heated debate erupted during Wednesday’s cabinet session over designating funds to be spent given the lack of an approved state budget, reported As Safir newspaper on Thursday.

The dispute had initially started during Monday’s cabinet session.

In the first meeting, the matter of designating LL 750 million to the General Security based on the 2011 state budget was suggested.

This meant that the government would be spending funds according to a law that does not exist, similar to what happened in the governments of former Premiers Fouad Saniora and Saad Hariri.

Minister Charbel Nahhas was the first to object to the proposal, noting that a budget had not been approved yet, reported the newspaper.

He suggested that the matter be resolved through a legal settlement because following through with it in light of the absence of a budget violates the constitution and law.

As Safir reported that Change and Reform bloc, Hizbullah, and AMAL ministers were surprised with the objection.

Other ministers noted that the General Security’s demand of the LL 750 million does not require such an uproar.

The dispute erupted again on Wednesday when Nahhas discovered that a similar proposal was to be discussed during the cabinet session.

Change and Reform ministers warned against adopting the same mistakes as the previous governments because that would clear them of any blame and it would instate a flawed method of spending public funds.

The matter was dropped in order for it to be discussed in future sessions under President Michel Suleiman.