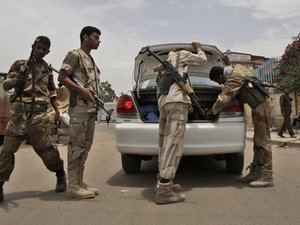 Ayad al-Shabwani, a leader of Yemen-based al-Qaida in the Arabian Peninsula (AQAP), was killed during a battle with the army that left 10 soldiers dead, a military source and medics said on Thursday.

Shabwani was killed on Tuesday by artillery fire during heavy fighting that continued into Wednesday between the army and suspected al-Qaida militants near Zinjibar, the capital of Abyan province, east of the main southern city Aden, the military source said.

He was killed about four kilometers east of Zinjibar, the source added.

Medical sources said that 10 soldiers had been killed and 33 wounded in the fighting near Zinjibar.

One medic at a military hospital said that it had received nine dead soldiers and 15 wounded on Wednesday night.

And a medic at another hospital in Aden said it received 19 wounded soldiers from the 31st armored brigade, and that one had died of his wounds.

The army was attacked by militants south of Zinjibar, "resulting in the death and wounding of a number of soldiers," but the attack was repulsed and the soldiers were able to progress toward Zinjibar, the military source said.

Additionally, "units from the 31st armored brigade and the 119th armoured brigade launched a number of Katyusha rockets at hideouts of al-Qaida gunmen in al-Koud area" south of Zinjibar, "killing and wounding dozens of terrorists," the source added.

A wounded soldier in the hospital in Aden said: "We were in direct fighting with al-Qaida partisans in Al-Koud area, and we killed a large number of them.

"Our forces headed toward the bridge to Zinjibar and when we arrived there ... armed terrorists opened fire with automatic weapons, killing and wounding a number of us," he said.

"When I recover, I will return to Zinjibar to fight these evil terrorists," he added.

The official Saba news agency had said earlier that "two prominent members of the al-Qaida leadership were killed ... in Abyan province," naming them as Ayad al-Shabwani and Awad Mohammed Saleh al-Shabwani.

Yemen had said before that Ayad al-Shabwani was killed, along with five other leaders, in a January 15 air strike on a convoy of vehicles. Three days later, AQAP denied that either Shabwani or the five others had been killed.

Militants believed to be linked to al-Qaida took over much of Zinjibar in late May, and have been battling security forces ever since, displacing thousands of residents.

Yemen is the ancestral homeland of veteran al-Qaida leader Osama bin Laden, who was killed in a U.S. commando raid in Pakistan on May 2.